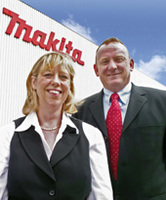 Janet Shelley has been awarded the honour by Her Majesty The Queen for services to the construction industry.

The company, which Janet founded in 2003, employs a largely female workforce to provide a construction and maintenance service in the Milton Keynes, Buckinghamshire and North Oxfordshire.

Janet said: “This is a very exciting honour which I have achieved with the help of many contributors and organisations and I never forget how important these relationships are. Four years ago I was successfully employed in IT, knew nothing about construction, and now itâ€™s my life.

“I want to share my ambitions with other determined women. Itâ€™s been a major learning curve but I am proof that women do have a place in the construction industry.

The companyâ€™s training school is located at its headquarters in Bletchley. Its Jobs For The Girls programme provides six-week courses in building maintenance, new build, carpentry and plumbing followed by work placement in local construction companies.

The programme is free thanks to support from the European Social Fund.

Women Builders is supported by the Construction Industry Training Board and SummitSkills, the Sector Skills Council for Construction through which employers have a direct route to influence strategic planning for skills and training.

Janet is the current chair of Women and Manual Trades, an organisation promoting women in the trades through education and example, and is vice chair of SummitSkills, Careers and Diversity Interest Group.

The company has made many successful partnership arrangements with national brands during its few years of trading including Milton Keynes-based Makita, the UK arm of the global professional power tool manufacturer, which provides market-leading power tools for the Women Builders training facility.

Its marketing manager Andrew Helby said: “As a responsible power tool manufacturer we are serious about the raising of construction trades skills and standards and with the Women Builders organisation being a close neighbour it is even more appropriate that we work closely to help Janet achieve her ambitions. We are proud of her achievements.”

Nigel Mason, Professor of Physics at the Open University, was awarded an OBE for his services to science. Jane Aldgate, adviser on Child Welfare and Professor of Social Care received the same honour for service to Children and Families.

Professor Mason is the director of the inaugural Milton Keynes Science Festival, which takes place next month.