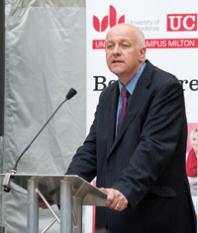 Bedford
Bill Rammell (pictured) outlined UCMK’s importance to Milton Keynes future prosperity in a briefing to senior figures in the public and private sectors whom he told UCMK will meet "the skills needs of local business; furthering the city’s international outlook and develop the next generation of the MK workforce."
The figure will steadily increase as student numbers grow.  Research shows that the more effectively the new institution meets the needs of business the better the financial return for the local economy.
Mr Rammell highlighted evidence indicating just how valuable a top level academic institution is to a growing, thriving city.
Research from Strathclyde University demonstrates the economic multiplier of universities, according to their region. In the East Midlands, the research shows that for every £1million of revenue into a university, East Midlands universities generate a further £1.13 million for the region.
UCMK is a joint venture between University of Bedfordshire and Milton Keynes Council. Mr Rammell said: "I know of nowhere else where a local authority is matching a University’s investment in delivering a new campus."
That joint investment already committed stands at £25 million.
Mr Rammell believes the opening of UCMK will be a giant leap forward in the development from "New Town" to "Smart City."
He says it is a triumph of the cooperation between businesses, council, educationalists and other local stakeholders that UCMK has finally been achieved.
He said: "It often comes as a surprise to those who don’t know new towns, but we often have to break down barriers that have more in common with disadvantaged urban centres than they do with suburban or rural settings."
He pointed out that new towns were situated to take advantage of transport links to the "big" cities, but that their future prosperity will be based on being Smart Cities, fully equipped to meet the demands of the digital world.
He said that one of the most vital of those demands is educating young people to meet the needs of business.
Mr Rammell joined dignitaries and students on a hard hat tour of their new facilities at Saxon Court which will include:
Mr Rammell said UCMK’s global outlook will be key in achieving the shared goal of becoming a truly international city.  "Many of the students will come from overseas – attracted by the location and by the focus on engineering and technology.
“It is exciting to be working with civic leaders who share my passion for an international approach to higher education – offering life-changing opportunities for UK and overseas students alike."
61