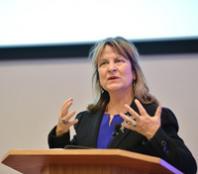 Bedford
Speaking at the University of Bedfordshire on Monday – poignantly, Holocaust Memorial Day – Baroness Helen Kennedy pictured told a public audience of around 250 University students, staff, invited guests and local residents that there were many misconceptions about the Convention, often perpetuated by certain national newspapers.
She said: “The European Convention on Human Rights is totally separate from the European Union, but many people in the UK seem to think they are connected, and this is a view that certain media outlets do nothing to correct.
“Human rights are about protecting the basic rights of individuals, such as the right to life, to freedom of expression, and to equality before the law.
”If the UK were to leave the Convention, what kind of message would it send to the likes of President Putin of Russia, where journalists may be locked up for disagreeing with his regime, and where laws have been introduced that restrict the freedom and rights of homosexuals?”
Baroness Kennedy also suggested that certain elements of the British media were guilty of misleading the British public about particular aspects of the work of the European Court of Human Rights, which was set up by the Convention, such as its decisions on votes for prisoners and the issue of whole-life sentences.
The expert in human rights law pointed out that the Court is not, as some elements of the British media claim, telling the UK that it must at some point release from prison people who have been given life sentences.
“The Court is saying only that all people sentenced to life imprisonment should have a review, perhaps 25 years into their sentence, just to ensure that something has not gone horrendously wrong,” she said.
“We are not being told by the Court that we must release those who carried out the most horrendous of crimes and who remain a danger to society.”
As well as talking about national and international human rights issues, Baroness Kennedy spoke passionately about her life-long advocacy on behalf of the powerless and vulnerable and her belief in access to justice for all.
The barrister was critical of the government’s plans to cut legal aid.
“We must have a justice system that is accessible to all, not just the wealthy and big corporations.  Cutting legal aid would deprive the most vulnerable members of our society and deny them access to justice.
"The justice system would fail those who need it most, those who do not have a voice.We must have a system which is accessible to all,” said Baroness Kennedy, who is co-chair of the International Bar Association’s Human Rights Institute.
She also spoke of her pride of Britain being a nation where the public purse covers the cost to allow everyone the right of a legal representative.
Baroness Kennedy has acted in a number of prominent cases over the last 30 years, including some involving people accused of terrorism, such as the Brighton bombing, the Guildford Four appeal and the conspiracy to bomb transatlantic airlines.
She is also a fierce advocate against the discrimination of women in the law – whether victims or defendants – and in favour of promoting equal opportunities for women at the Bar, as lawyers.
University of Bedfordshire vice chancellor Bill Rammell described Baroness Kennedy’s lecture as "inspirational".
He added: “We are a university that is open to challenge and welcomes debate.  We are not afraid to open up our lecture halls to high profile figures, leading thinkers and world experts, and to listen to a range of different perspectives.”
·         World-renowned scientist and ‘Child of Our Time’ television presenter, Professor Lord Robert Winston, will speak about science and society at a public lecture at the University of Bedfordshire tomorrow (Thursday).
17