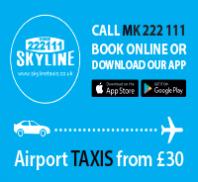 Skyline Taxis says it intends to create more than 400 new jobs as a result of its purchase of Phoenix Class.

The company is also looking to expand into Bedford, a move which could increase the Skyline fleet of vehicles to 1,300.

Skyline Taxis opened in Milton Keynes in 1985 and today operates 700 vehicles. It has invested in a new cloud-based taxi dispatch system, iCabbi,  and call centre and co-founded the booking app RIIDE as part of a partnership between taxi operators in the UK, Ireland and the USA.

Managing director Gav Sokhi said: “We have developed and implemented systems that have quite simply transformed our business.

“We considered expanding into Northampton years ago but our software and systems held us back. Now, through this technology, we can spread our wings.”