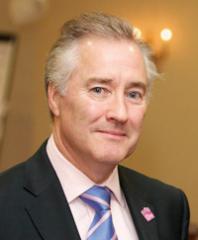 The airport’s board of directors has announced that chairman Clive Condie has moved into the role of executive chairman, assuming wider responsibilities until a replacement managing director is appointed.

Mr Jones (pictured) joined London Luton in 2007 and has led the Airport through a period of significant change to become London’s leading local airport with huge potential for future growth.

He said: “It has been a privilege to serve as managing director for the last seven years and I have been proud to lead the airport through some significant changes and to serve our passengers, carriers and the local community.

“I am confident that I leave London Luton Airport well-positioned under new leadership to progress through the next chapter in its exciting history.”

The airport is starting work on an ambitious plan to increase annual passenger numbers from ten million to 18 million by 2031, through a redevelopment of the airport.

Mr Condie was appointed chairman of London Luton in November last year.  He has over three decades’ experience running international airports including Lima Airport, Peru, and Manchester Airport plc. He previously served as a non-executive director of London Luton.

Mr Condie said: “On behalf of everyone at London Luton Airport, I would like to thank Glyn for his service over the last seven years. We have commenced the search for a successor who will be at the centre of our exciting plans to transform London Luton over the next few years.”