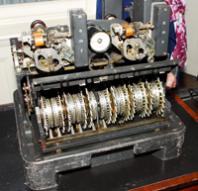 The launch was attended by some Bletchley Park veterans, their families and special guests including BBC presenter Paddy O’Connell.
Among the veterans was O’Connell’s mother Betty, who was one of the first operators of Colossus, the computer that helped to break the cipher.

Deemed to be ‘unbreakable’ the Lorenz cipher was used to encrypt communications between Hitler and his High Command. Far more complex than Enigma, Lorenz-encoded messages carried invaluable strategic information.

The decrypts are credited with shortening the war and saving countless lives.

The Lorenz book is the autobiographical story of the life of the late Captain Jerry Roberts, senior code breaker at Bletchley Park, who died in 2014.

At the launch, BBC Radio 4 presenter Paddy O’Connell gave an insight into the complexity of the codebreakers’ task by playing an audio signal representing the enciphered German text as it would have been intercepted in Britain.

Visibly moved by the sound, Betty O’Connell and her Colossus operator colleague Irene Dixon recalled how they had to keep their wartime work secret for decades.

They were delighted, they said, that the story was beginning to gain the prominence that it rightfully deserves.

They hoped that the book would generate wider public interest in the incredible achievements of the Lorenz codebreakers.

Betty said: “The names of the three Ts – the Testery; Bill Tutte and Tommy Flowers should be known throughout the land.

"The Testery linguists broke the code by hand after Bill Tutte had miraculously worked out how the Lorenz machine worked without ever having seen it. Then Tommy Flower’s creation of the Colossus computer helped speed up codebreaking hastening the end of the war.

“It is marvellous to see this story from the inside of the Testery, a group of people that I never even knew existed until decades after the war.”

Captain Roberts’ widow Mei, whose determination and hard work that enabled the book to be completed and published almost three years after her husband’s death also attended the book’s launch in the Tunny Gallery in Block H, alongside one of four remaining Lorenz SZ42 cipher machines and a rebuilt Tunny machine (the British re-engineered version of the Lorenz SZ42).

Next door is the rebuilt Colossus, standing on the exact spot that Colossus No 9 occupied during the war.