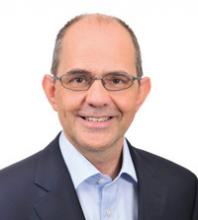 Bedford
The forecast is actually slightly better than in many other parts of the country. However, when it comes to leading the recovery, the sunshine is expected to come through a bit sooner in London and the South East.
The outlook for the regional economy is significantly better than for the Eurozone, the report adds. It says average GDP growth is expected to be negligible.
Mike Robinson (pictured), senior partner at PwC’s Milton Keynes office, said: “Recovery in the UK has stalled over the past year as the Eurozone crisis has taken its toll. However, while official data suggests that the economy fell back into a technical recession in the first quarter of 2012, labour market and business survey data suggest continued modest growth.”
He expects inflation to fall back towards its 2% target in the next year, which will boost consumer spending.
Mr Robinson added: “In line with the UK as a whole, the outlook for Milton Keynes region remains cloudy but with scope for improvement.
"Overall we can look forward to at least moderate average growth in 2012 and 2013. However, risks from further storms in the Eurozone need to be taken into consideration and businesses should make appropriate contingency plans for this.”
81