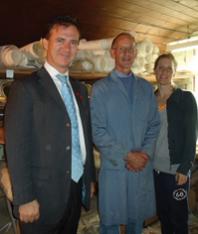 Parchment maker William Cowley, based in Newport Pagnell, is the world’s leading manufacturer of the special calfskin parchment vellum, used to record historic documents such as Acts of Parliament.

The material has been used for hundreds of years and is far more durable and stronger than paper. However, last year the House of Lords voted to cease its use in favour of archive paper in a bid to save money.

MPs have opted to overturn the Lords decision, voting 117-38 in favour of preserving the tradition. The use of vellum in Parliament costs £103,000 a year but Cabinet Office minister Matthew Hancock, the Paymaster General, is to investigate ways to make the process more cost-effective.

William Cowley general manager Paul Wright said: “Vellum has proven itself over the millennia to be the best medium for creating and storing treasured documents. As the world’s leading vellum makers, William Cowley is delighted that Matt Hancock has recognised the significance of this ancient craft.

“This is a vote of confidence not only to support traditional crafts, but also to back Britain’s small businesses as they endeavour to export to foreign markets.”

Milton Keynes North MP Mark Lancaster added: “I was delighted that Parliament has recognised the value of continuing to use vellum. It is because of this practice that we can read so much of our rich history, whether it be the Magna Carta or the death warrant of King Charles I.

“I am also delighted for William Cowley, which I know are a hard-working, passionate local business and a cause of great pride in Milton Keynes.”

The vote means that William Cowley, which was established in 1870, will continue to supply Parliament with calfskin as it has done for over a century.

Mr Hancock said: “Printing vellum copies of laws provides a durability we cannot guarantee in the digital world as we simply cannot know how easy it will be to read today’s data in a decade, let alone in a millennium.

“I firmly believe that being a modernising government is about making the best use of the old and the new.

“I want us to continue recording the laws of the land on vellum for future generations – it gives laws a sense of permanence and we have a duty to pass on this tradition.”

“I hope the two houses will now work together to fully assess the costs.”