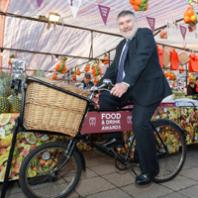 The Bedfordshire Food & Drink Awards were launched at the Mayor’s Parlour, in Bedford on Wednesday with Mayor Dave Hodgson boarding the promotional Pashley delivery bicycle at the town’s market later to encourage venues to get on the campaign trail.

The Mayor said there is a need to celebrate quality food and drink venues but added: “Hhow good we are in the borough at keeping them a secret.”

Karen McGeeney, communications director of Bedfordshire Food & Drink Awards, said: “The Mayor is a good sport for getting on board our bike. He recognises how vitally important independent food and drink businesses are to the borough and county economy, for the jobs they support and the pleasure they give.

“These awards are creating a mass movement in support of quality businesses against the bland and boring. We urge everyone to get on their bikes and vote for their favourite food and drink businesses and to follow the campaign for votes on Twitter by looking for the hashtag #BedsFinest.”

The awards, which have seen more than 70 businesses nominated before Wednesday’s launch, are also on Facebook – search for Bedfordshire Food & Drink Awards. The businesses can be nominated in up to three categories, with voting taking place until May 1.

Ian Cording, from Bedford, and awards sponsor coffee brand Aurile said: “We at Aurile are both proud and excited to be sponsors of the Best Independent local Tea or Coffee Shop.

“While our concentration is on the domestic market as ‘Independents’ providing high quality coffees and teas we have strong synergy with those operating outside the large multinational chains and the often indifferent quality they offer.

“Being a great advocate of Awards generally and the benefits experienced through being nominated, a finalist or a winner, being ‘judged’ by voting customers, will be a sure test of the independents commitment to both quality of offering and service excellence.”

For details of the awards, nominated business as well as details how to nominate and vote, visit  http://www.bedsfoodanddrinkawards.co.uk/