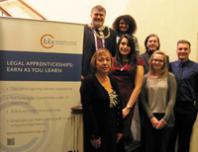 Bedford
CILEx is a firm believer in the value of apprenticeships and only this month has taken on two new Business Administration Apprentices in addition to the two apprentices already working at the CILEx Group.
HR manager Janet Bishop said: “We have employed apprentices for more than three years and all those who have completed their apprenticeship qualifications have gone on to secure permanent jobs at the company.
“We practise what we preach by not only promoting the benefits of apprenticeships to the legal sector, but by employing apprentices from the local community too.”
Janet is also an Apprenticeship Ambassador for Bedford Mayor Dave Hodgson’s ‘2016 in 2016’ Apprenticeship Challenge: a commitment that Bedford Borough would see at least 2016 apprenticeships created per year by 2016.
Janet’s role is to encourage other local employers to step up to the Apprenticeship Challenge.
19-year-old Kathryn Jack completed her business administration apprenticeship with the CILEx Group last year and is now employed as a customer advisor.
She is also an Apprenticeship Ambassador for the ‘2016 in 2016’ project, visiting schools and people in the borough to talk about the benefits of becoming an apprentice.
“I left school after my GCSEs as I knew I wanted to work and start developing my career,” she says. “Completing my Advanced Apprenticeship in Business Administration has been such a great experience and to end up with a full-time, permanent job is fantastic.”
Mr Hodgson said: said: “We are ambitious for apprenticeships in Bedford Borough, as our ‘2016 in 2016’ Apprenticeship Challenge shows. If we are to achieve 2016 new apprenticeships per year by 2016 it will need all partners, including employers, to show real commitment to this goal.
“The Chartered Institute of Legal Executives is setting a great example in this respect, and I wish all of their apprentices the very best for a successful apprenticeship and a long and rewarding future career.”
CILEx is the awarding body for Legal Services Apprenticeships which were successfully launched in England and Wales last year.
Legal services providers, including both international and high-street law firms, have welcomed the opportunity to employ and develop in-house talent via the Legal Services Apprenticeship route. O
n completion, the apprentices receive nationally recognised qualifications and can go on to study further qualifications to become Chartered Legal Executive lawyers.
CILEx is exhibiting at the National Apprenticeship Week event at Bodyflight in Clapham on Thursday, March 6. The event is open to youngsters aged 15 to 19 and to book a place, call the Jobs Hub on 01234 223510. CILEx will also be hosting a twitter chat on Tuesday (March 4) from 5pm to 7pm, follow #NAWlegal or @CILExLawyers to join in.