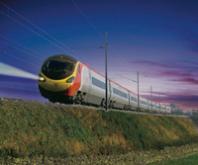 Bedford
Andrew Pakes was speaking after Virgin Trains was awarded a 23-month contract to run the West Coast Main Line that runs through Milton Keynes and Leighton Buzzard.
It follows the revoked decision to award the franchise to rival First Group – a contract that was later rescinded amid major controversy over the criteria under which it had been awarded.
Mr Pakes said: “This announcement with Virgin ends month of uncertainty for passengers but the government still has big questions to answer about this incompetent mess.
“The shambles on the franchise has cost taxpayers at least £40 million.  The government appear to have dropped plans to cut fares on the route and we don’t know what will happen when the franchise is re-tendered in 23 months’ time.
“The government needs to rethink its approach to cut-price franchising and put passengers first.”
Virgin has already increased capacity on many of its Pendolino trains by adding 150 Standard Class seats – a 42% increase.
Virgin Rail Group chief executive Tony Collins said: “We will not be sitting back in the coming months but are keen to introduce more improvements to the service.”
52