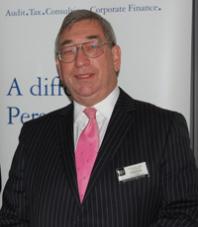 Bedford
The current position is unsustainable, the IoD has told Chancellor of the Exchequer Alastair Darling, and requires a radically different approach. Beyond the current recession there is a need for a clear policy on tackling excessive spending.
A cut in public spending to 35% of gross domestic product by 2020 would put the UK back in the world class league of competitive economies, it says. However, tightening of fiscal policy should not include tax increases.
Philip Smith (pictured), chair of the IoD’s Milton Keynes branch, said: “At the present time, everybody is understandably focused on how we can stimulate demand in the economy. But we also have to consider the effect of current policies on long-term supply side performance.
“Excessive public spending is the reason why the UK entered the recession in such a poor fiscal position and so it will have to be reined back sharply. The alternative of higher deficits and higher taxes would be even worse for the economy, undermining growth in the long run.
“Our tough public spending regime would ring fence and protect key infrastructure spending and also permit a progressive reduction in Corporation Tax.
“We are at a fork in the road. Unless we face up to the tough long-term choices we could be stuck with big government and big deficits for a generation. The economic consequences of the current crisis must not fall on the private sector alone”.
With regard to specific tax measures, the IoD states:
20