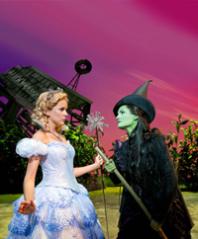 Bedford
Wicked, acclaimed as “one of the most popular West End musicals ever" by the London Evening Standard, continues its open-ended run at the Apollo Victoria Theatre where it is already the 16th longest-running musical in West End theatre history.
Based on the novel by Gregory Maguire that ingeniously and wittily reimagines the stories and characters created by L. Frank Baum in The Wonderful Wizard of Oz, Wicked tells the story of an unlikely but profound friendship between two sorcery students.
Their extraordinary adventures in Oz will ultimately see them fulfil their destinies as Glinda The Good and the Wicked Witch of the West.
Wicked has music and lyrics by multi GRAMMY and Academy Award winner Stephen Schwartz and is directed by two-time Tony Award winner and Olivier Award nominee Joe Mantello.
Packed with thrilling technical wizardry, stunning costumes and show-stopping songs Wicked is an unforgettable experience for audiences of all ages.
It runs at Milton Keynes Theatre from February 4 until March 8.
Book now at Milton Keynes Theatre Box Office, Call 0844 871 7652 (bkg fee) or visit www.atgtickets.com/miltonkeynes (bkg fee)
22