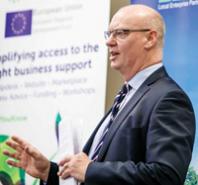 The Local Growth Fund will help to kick start a series of projects aimed at propelling the South East Midlands on to the world stage.

Communities Secretary Sajid Javid today (Thursday) unveiled the latest round of funding agreements, with £59 million earmarked for projects outlined in a submission by the South East Midlands Local Enterprise Partnership. These include:

A new driving emissions centre to be built at MAHLE Powertrain in Northampton, with £2.1 million of grant funding and creating 63 new jobs;

A £7.9 million grant to complete the Northampton North West Relief Road between the A428 Harlestone Road and the A5199 Welford Road, contributing to 6,600 new homes and 3,613 new jobs.

Mr Javid said: “Across the South East Midlands we are giving people the resources they need to support businesses, improve skills and create jobs.”

The funding builds on previous settlements totalling £206 million given to the SEMLEP area in the past two Local Growth Deals, money which has already been used to help provide the infrastructure needed to contribute towards thousands of new homes and jobs.

SEMLEP chief executive Stephen Catchpole (pictured) said: “The Local Growth Fund money is essential to our ambitions of building a vibrant, successful and pioneering region which is leading the way in growing our local economy and creating thriving local communities while contributing significantly to the national economy.”

Projects funded by money from the previous Local Growth Deals, including the Woodside Link in Dunstable and the new Northampton College campus at Daventry, are nearing completion, Mr Catchpole added.

“We have shown our ambition in previous Local Growth Deals. We look forward to building on that success with the latest round of funding and getting a new wave of projects up and running, helping to provide the infrastructure needed to bring about even more growth.”

Today’s £59 million investment will be used to help fund a series of new projects over the next four years, with a period of due diligence now set to take place to determine exactly where and when the money will be spent.

This will build on 17 projects funded in the first two rounds of SEMLEP’s Local Growth Deal, which included work to improve transport infrastructure around Bedford Western Bypass, development of the Milton Keynes Centre of Medicine and the Vulcan Ironworks in the Cultural Quarter in Northampton.

In addition, a further ten projects have previously been funded in the former Northamptonshire Enterprise Partnership area. Projects include the A45 Daventry Development Link and the food and drink innovation centre at Moulton College.

SEMLEP chair Ann Limb said: “The receipt of £59 million funding in our area will enable SEMLEP partners to deliver some much-needed and exciting projects. This programme of investment will provide necessary infrastructure to deliver more growth, improve skills and productivity.

“SEMLEP is one of the country’s major growth areas and I look forward to working with the government to enable greater economic development across South East Midlands local authority areas.”

The funding builds on the recent National Infrastructure Commission report and the publication of the government’s Industrial Strategy, both of which earmarked the South East Midlands as a key area for future growth.