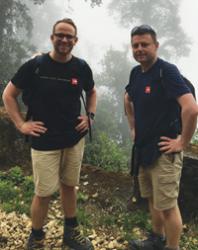 Martin Carmody, creative director at design agency White Leopard, travelled with friends Dale Stillman, James Cartwright and Andrew Abbott to the Himalayan country to offer support to the school as it sets about rebuilding after being seriously damaged by the earthquake.

Events held in the UK before the trip, including a charity ball and school non-uniform days, began the fund-raising. Martin and friends took the total past £12,000 by completing the Nepalese Three Valley Trekking Challenge before journeying to visit the school and its 140 pupils.

"The people of Kathmandu were such wonderful characters who really didn’t have much in the way of personal possessions but were still so positive and happy.”

His friend Dale is director of a Milton Keynes-based cashmere business. He travels regularly to Kathmandu to meet suppliers and witnessed the aftermath of the earthquake at first hand.

His reports inspired Martin and friends to set about raising money to help rebuild the school.

They also took along skipping ropes and games and organised a football festival for the Nepalese children.

“It was very humbling,” said Martin, now back at work at White Leopard’s Bow Brickhill offices. “The money we managed to raise collectively will not only make a real difference to the lives of the attending students but to their families who support them too.”