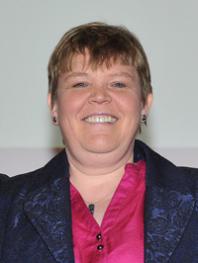 Monica Ferguson, Hilary Chipping, Dr Claire Guest and Dr Kerry Mashford have all been shortlisted for a 2016 First Women award. They were entered for the First Women awards after winning a Women Leaders Milton Keynes Award at the end of 2015.

Hilary Chipping, deputy chief executive and head of infrastructure at the South East Midlands Local Enterprise Partnership has been nominated for an award in the First Women in Public Service category for her work in housing and infrastructure.

Dr Claire Guest, co-founder, chief executive and director of operations of the charity Medical Detection Dogs, has been shortlisted in the First Women of Science & Technology category.

Jan Flawn CBE, who set up the Women Leaders MK competition and nominated all the finalists, said: “It is fantastic to see all these ladies gaining the recognition they deserve. When I established the Women Leaders MK Awards last year, the aim was to raise the profile of inspiring women within Milton Keynes both locally and nationally.

“The fact that we have four finalists from Milton Keynes proves that the city is not only at the forefront of many industries but also pioneering in its promotion of women in industry and business.”

Nominations for Women Leaders MK 2016 are now open. To nominate a successful and inspiring woman in the Milton Keynes area, visit www.womenleadersmk.co.uk

Winners of a Women Leaders MK award will be given the opportunity to be nominated for a national First Women award.