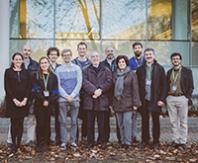 The €1.4million AiRT project has been funded via Horizon 2020, the EU’s biggest research and innovation programme, and is this month at its half way point.

The project has been kept firmly under wraps until now and is a close collaboration between Luton-based Clearhead, Belgium-based Pozyx Labs which specialises in indoor positioning hardware and software, the university and hardware and manufacturing expert AeroTools UAT, based in Madrid.

Gavin O’Brien, partner and business director of Clearhead, said: “Winning this job has been a huge coup for us and the UK as a whole. So much of the film equipment we use comes from China or America so to see Europe leading on this and to be playing a key part in the creation of a world first is extraordinary.”

For the last 12 months the Clearhead team have been flying to Spain, documenting the drone’s development on film.

As well as leading on the branding and marketing of the drone, Clearhead’s role has led on the research and focus groups. These have brought together a mix of Europe’s best film makers, photographers, theatre performers and architects  and have taken place throughout 2017 in the UK and Spain.

Clearhead’s chief creative officer Alex Lawrence said: “These focus groups have enabled us to understand what creative professionals need and would most value from an indoor drone, how it could be used and what needs to be included in the design.

"People told us they wanted an indoor drone and one that is safe, easy to navigate, nimble, with a high spec camera and good battery life.”

The potential of the drone is extensive. “Architects will be able to see if there is damage at the top of towers,” said Mr O’Brien. “In a theatre you will be able to shoot over a crowd and behind the audience. For film makers there will be motion trackers so the drone can lock on to a person and follow you as you walk. Exciting times ahead.”

The new drone is expected to be ready for trade shows by June 2018.