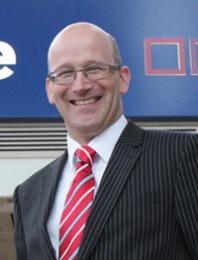 Bedford
The centre has seen shopper footfall rise by more than 13 per cent in the run-up to Chriistmas Day, with more than 750,000 shoppers forecast.
The shopping centre believes that its Christmas display on the theme of ‘An Olde English Christmas’, the outdoor ice rink, Destination Dining and the refurbishment of department store House of Fraser has boosted visitor numbers.
Robert Hall (pictured), centre director at thecentre:mk, said: “We believe it is our continued focus on the promotion of thecentre:mk as the region’s premier shopping destination that has allowed us to continue the success of previous years.”
House of Fraser reopened in November after a £4.5 million refurbishment. General manager Steve Bluff said: “Our store has been bustling in the lead-up to Christmas.”
thecentre:mk hopes to see this success continue over Christmas into the January sale period. The Next sale begins at 6am on Boxing Day, with Marks and Spencer and House of Fraser launching at 8am. The following day John Lewis will open its doors at 8am.
21