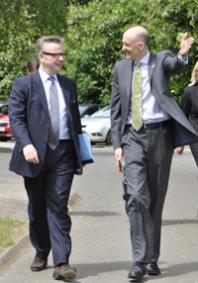 Bedford
Mr Gove is pictured with headteacher David Hudson as he tours the school.
Buckingham MP John Bercow, Speaker of the House of Commons, also joined the visit today (Friday) and briefed the Education Secretary on the plans.
The Department for Education has awarded the project a grant of £2.9 million. The school has raised a total £3.4 million towards the project but still requires a further £1.6 million to complete the project and has appealed to business for support.
Mr Hudson said: “Today’s visit has been a wonderful opportunity to explain the extent of our need for investment in new science facilities and it is heartening to see Mr Gove’s approval of the increased opportunities the Discovery Centre will give our students from 2015.
“I welcome the opportunity our students had today to demonstrate to Mr Gove that, although they feel honoured to attend one of the oldest state schools in the country, they are 21st-century students who are deserving of a 21st-century learning environment and that they have real potential to be the leaders and innovators of the future.”
Construction work is due to begin later this year. The Discovery centre will consist of 12 themed science laboratories and play a key role in the Royal Latin’s plans to wpork more closely with local businesses, universities and the wider community.
The school launched its RLS600 campaign last year to raise the £5 million required to build the centre and has received a major donation from RLS old boy Julian Thomas, who founded and runs the automotive test equipment manufacturer Racelogic, based in Buckingham.
Mr Gove also visited the Buckingham school nearby.
Buckingham MP John Bercow (pictured), who accompanied Mr Gove on his visit, said: “I am delighted that the Education Secretary has been able to see first-hand the excellent work that both schools are doing.
“The proposed Discovery Centre at The Royal Latin School will be a flagship facility, actively demonstrating the benefits of primary, secondary and tertiary education working together in a cohesive fashion with the full support of industry and the wider community.
“I’m delighted to see interested parties stepping forward to contribute financially and practically to the project, and would encourage others to do the same – we have a collective responsibility to ensure that this new facility can be completed in good time.”
70