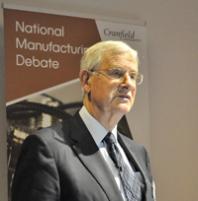 Bedford
Sir Alan (pictured) said that manufacturing was a much easier and more realistic option for rebalancing the economy, requiring only a gain of between 10% and 20% to close the gap, whereas for other industries such as the knowledge economy and financial services, the percentage would likely be nearer 100%.
Professor Rajkumar Roy, head of Cranfield University’s manufacturing department, added: “UK manufacturing needs targeted incentives to regenerate local manufacturing in all sectors. Government needs to get more involved in supporting business R&D and create an environment for companies to invest long term in the UK.
“We must build on our global capability and focus on creating new sectors for UK manufacturing, such as through-life engineering services.”
The debate attracted industry representatives, policy drivers and academics from across the UK and internationally and heard from a number of influential players in manufacturing, including Mark Prisk, the Minister of State for Business and Enterprise.
Mr Prisk highlighted the government’s investment in encouraging R&D investment in small businesses through reformation of the tax system and the need for a collaborative approach to skills and training. He stressed the importance of manufacturing in retaining a sustained balance in long-term job creation, maintaining existing capabilities while also investing in new innovations.
The event features an animated and passionate two-hour debate, during which delegates posed questions to the nine-strong panel, based on the themes of investment and banking in manufacturing, relationships with Europe, the role of universities, and the question of how manufacturing can contribute to the rebalancing of the economy.
The recent debate surrounding the carbon budget received little mention during the keynote presentations in the morning. However the issue raised some discussions during the debate, where questions arose on the potential for the energy sector in relation to manufacturing.
Sir Alan countered that it would be better to “create the right fertile environment where industry can flourish” rather than focusing on certain sectors. 50% of manufacturing GDP comes from small and medium-sized businesses, he added, so it made economic sense to “fix existing issues” before trying to find new areas – create an environment for investment, which benefits both existing organisations and provides a platform for new ones to grow.
On the subject of what universities were able to do to support UK manufacturing, there was a general feeling that universities were in the best position to help SMEs in particular, offering an opportunity to tap into the experience and knowledge of these institutions.
Among the expert panellists were Dr Gareth Williams, Airbus VP R&T Business Development & Partnerships, and Andreas Pelz, Global Chief of Service Engineering for Rolls-Royce plc.
Dr Williams told the debate that Germany was investing heavily  in education, with a clear policy driven approach to investing in people as a means of pulling out of the recession. The UK on the other hand, appeared to be withdrawing funds in education.
78