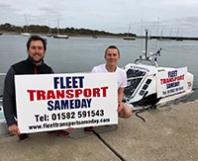 Half-brothers Greg Bailey and Jude Massey pictured are aiming to raise £100,000 for the British Skin Foundation’s skin cancer research by rowing unsupported across the Atlantic Ocean.

Their epic 3,000-mile journey, under the name Team Ocean Brothers, is in memory of their late stepfather/father, a keen sailor, who suffered with skin cancer for 16 years until he passed away in 2015.

Luton company Fleet Transport Sameday has agreed to sponsor the brothers’ attempt with a £5,000 donation.

Feet Transport director Carol Kent said: “We are extremely proud and honoured to be sponsoring such a fantastic cause, one that is also so close to our hearts.

“My father was diagnosed with skin cancer three years ago. He underwent many operations and numerous rounds of radiotherapy which he faced with a huge amount of courage and dignity, he battled so bravely but sadly he lost his fight in June this year.

“ The pain and devastation from losing the heart of our family is at times unbearable but in joining Greg and Jude’s cause we can at least feel as if we are helping in some small way. We hope that our sponsorship can help in raising awareness for skin cancer as well as adding our support to Greg and Jude as they embark on their momentous journey.”

Fellow director Paul Kent added: “We are full of admiration for what the brothers are doing, what a fantastic but daunting challenge they face and we cannot wait to start following them on their journey.”

Greg and Jude are due to begin their journey from Gran Canaria to Barbados in January. They expect it to take between six and 11 weeks.