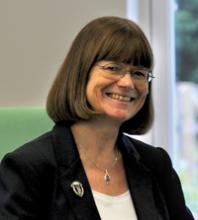 Hilary Chipping (pictured) collected the Public Service Award at The First Women Awards 2016, a ceremony designed to celebrate trailblazing and outstanding women from across the UK.

Hilary, who was described by judges as “making the world a better place”, is a trained economist and her career in government has spanned a number of departments at both local and national levels, where she has constantly advocated evidence-based policy making.

In her current role at SEMLEP Hilary helped secure £70 million of investment for local projects to deliver economic and social benefits to the South East Midlands.

SEMLEP chair Dr Ann Limb said: “Hilary is a women of immense commitment. She has a quiet personality and a modesty that sometimes leads people to underrate her talent and this makes this national award for public service all the more valued and valuable.

“Hilary has been a dedicated public servant for 40 years and all her life has championed the Milton Keynes and wider South East Midlands area, where she has lived and worked all her life.

"Over the last six years she has worked tirelessly for SEMLEP and this award is deserved recognition for all that Hilary has achieved personally, on behalf of the people and communities of the region and for the LEP.”

Hilary Chipping said: “It was a great honour and a surprise to receive this award. I hope to use this award to encourage more women to embark on careers in public service, especially with a focus on transport and infrastructure.”