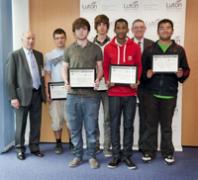 Bedford
Mr Sheridan (pictured, far left), owner of engineering company Veruth Industries, is passionate about the future of engineering in the UK and wanted to do something to encourage young people to study at a higher level.
He agreed to support a talented individual to the tune of £15,000 bursary. His only conditions were that the young person had to be a resident of the Luton postcode area and progressing to a UK university.
Mr Sheridan’s initiative has been supported throughout by Bedfordshire & Luton Chamber, which contacted education establishments throughout the town. Luton Sixth Form College was the first to accept the challenge.
Prospective students were asked to write an essay on ‘Why I Want to Study Engineering’ and their submissions were judged by a panel comprising Chamber chairman Brian Hibbert, Mr Sheridan and Professor Sir Colin J Humphreys, director of research at the  Department of Materials Science & Metallurgy of Cambridge University.
The inaugural winner was Luton Sixth Form College student Ruairi McDonagh. Mr Hibbert – one of the judges – has urged other businesses to follow Mr Sheridan’s initiative and help local students to reach university.
Ruairi (third from left) received the bursary from Mr Sheridan at a ceremony at the college. He described it as “the biggest thing that has ever happened in my life”.
Mr Sheridan said: “I was absolutely delighted with the support from Luton Sixth Form College for this launch and even more delighted to support a local student with his engineering career.”
Mr Hibbert added: “It was a great honour for the Chamber to be involved in what will undoubtedly help Ruairi’s career and also raise the profile of engineering. With so many young people potentially barred by rising fees from studying for skills desperately needed by our local and national economy, we hope other business people will consider following David Sheridan’s example.”
Also considered were second-year students Jordan Taylor and Mohammed Rahman and first-year students Stephen Betts and Andranik Barsegjan. The bursary is to be awarded annually and selection panel have recommended that the two first-year students apply again next year.
College vice principal Altaf Hussain said: ‘We are so grateful to the Chamber and even more so to Veruth Holdings for considering our college’s students. We are very proud of the quality of our students and each year over 90% of them progress to university or employment. This award will make a real difference to Ruairi and it has been a fantastic experience for the runners-up.”
18