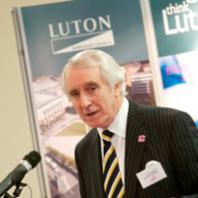 Bedford
Leading business and civic figures in the town are backing the bid and unveiled Luton’s plans at a gala launch held at Luton Hoo’s Warren Weir conference centre.
City status would result in new jobs, new businesses and new investment in the town, said London Luton Airport managing director and bid co-chair Glyn Jones. Ludlow Group chairman Derek Ludlow, the bid’s business champion, added that city status would create wealth that would ease social problems in the town.
Luton schoolchildren joined business and civic leaders at Warren Weir to hear details of the Love Luton City Status bid. Mr Ludlow said that few other cities in the UK could rival Luton for its cultural vibrancy and diversity.
He told his audience: “Luton has successfully transformed itself into a vibrant go-getting place that has great aspirations for the future. Recognition as a city will help to create more jobs and attract new companies.”
Sunderland had secured £5 billion worth of investment and created 30,000 new jobs as a result of being awarded city status in 1992.
Mr Ludlow (pictured) said: “You need to create wealth and if you create economic prosperity, many of the problems in society abate.”
The announcement that Express Newspapers was to relocate its West Ferry printing works to the former DHL building in Kimpton Road was a major boost to the town, he added.
Lord McKenzie of Luton, who is co-chair of the bid, called on the whole town to back the bid, which has been worked on since July last year and is to be submitted by the end of May. A decision on which applicant is awarded city status is expected in December
Bid committee co-chair Glyn Jones said: “We can use city status to create new businesses, new jobs and greater prosperity for all of us. We must make business the hub of the bid so that it can create the wealth.”
He urged business to support the bid by sponsoring the various packages and events promoting Luton as a potential city. Leading organisations in the town were already onboard, including General Motors, the airport, the University of Bedfordshire and bus operator Arriva, which had signwritten one of its buses with the ‘Love Luton’ logo and branding.
Mr Jones told his audience: “What has impressed me the most is the enthusiasm and optimism about the bid. There is real momentum and a real positive attitude because a lot of people want it to happen.”
54