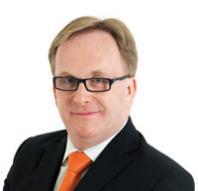 Bedford
Senior accountants locally have warned the region to expect further tax rises as the government battles to reduce the public spending deficit.
They have branded the Budget as “blatent electioneering” and warn that the government’s plans to borrow a further £567 billion over the next five years to reduce the shortfall between public spending and tax revenue can only mean one thing: larger tax bills for everyone.
Mike Hayes (pictured), tax principal at MacIntyre Hudson – whichhas offices in Milton Keynes and Bedford – said: “In a blatant electioneering budget, almost all difficult decisions about taxation and spending were put off until after the election.
"To pay for populist measures such as jobs and training for all school leavers, the Tote, student loans and the Dartford Tunnel are among state assets being auctioned off. In an attempt to gain the vote of local road users in the face of rising fuel prices, potholes are to be filled and the hard shoulders of motorways opened to road users."
He welcomed the government’s decision to double the Annual Investment Allowance and Entrepreneuers’ Relief, and no increase in Capital Gains Tax.
But Mr Hayes added: “How many Milton Keynes businesses looking to sell will believe the current huge differential between capital and income tax rates will survive the post-election budget?”
Jonathan Vowles, of Jonathan Vowles Chartered Accountants in Cranfield, said the tax rises introduced so far to tackle the public finances were “ about as useful as an ashtray on a motorbike.“
He agreed that more tax rises were on the way to fund the government’s plans. “The government expects to borrow an extra £567 billion over the next five years alone. And all of that extra borrowing, on top of the staggering amounts the country has already borrowed, will need to be repaid out of much bigger tax bills for all of us in the future.
“We estimate that, just in Milton Keynes, tax payers will end up paying £2 billion more in tax to pay for the extra borrowing announced in the Budget – so there will be some real losers. But fortunately the law does also allow the really well advised to make some very big tax savings.”
Analysts welcomed the news that the government has extended the ‘time to pay’ arrangement for businesses to pay their taxes. They approve of the reduction in business rates for small but say that savings are unlikely to exceed much more than £1,000 in most cases and will be negated by the planned 1% riss in National Insurance Contributions to 13.8% by April next year.
Richard Watson, head of tax at KPMG in Milton Keynes and St Albans, said:“It is unfortunate that the budget contained no radical thinking as regards the taxation of corporate sector. This is disappointing given that the Chancellor recognised that one key element in repaying the country’s debt will be growth of the economy and business is, after all, the engine of that growth.
“This is a missed opportunity in our view, although perhaps not surprising.
“At a time when there have been a number of warnings about the UK lagging behind in terms of its tax competitiveness and when businesses have been voicing concerns about our tax system, it is a shame that some of the key issues such as rate reduction and simplification seem to have been pushed into the long grass for now.
“On the positive side, business will be relieved that there were no bombshells on investment allowances.  It is positive that the government recognised that taking unilateral action to impose a bank tax could drive business out of the UK.  However, the banking sector will be watching developments from the G20 meeting closely.
“There were more measures for small businesses, particularly aimed at assisting cashflow but, looking at the finer detail, some of these measures could be too little too late for some businesses.”
Capital gains tax remains at 18% but probably not for long after the General Election, said Mazars tax partner Seb Tubb. “The discrepancy between income tax rates (50%) and capital gain tax rates (10-18%) presents opportunities for businesses to optimise their tax affairs. However the relatively low rate of capital gains tax might not last for long after the general election.”
14