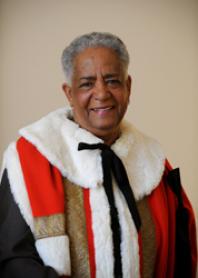 Bedford
Professor Les Ebdon, vice chancellor of the University of Bedfordshire, said: “Baroness Howells will be an excellent role model and ambassador for the university. The role of chancellor is an important one, acting as ceremonial head of the university and we’re confident that Baroness Howells will fulfil this with enthusiasm and commitment.”
The inauguration ceremony takes place at St Mary’s Church in Luton at 2pm.
Baroness Howells said: “It was a great honour to receive the invitation. I noticed that there is only one other black female university chancellor and, I thought, if the University of Bedfordshire is bold enough to ask me, other universities might follow.
“When I was growing up in the Caribbean in the 1930s and 1940s, education was seen as the number one goal not only of my generation but of my parents and the generations that went before them too. Education is freedom and power, and any investment in education is a good one.”
Her career background includes being the director of the Greenwich Racial Equality Council as well as a community and equal opportunities worker.
Baroness Howells is a trustee of the Stephen Lawrence Charitable Trust, and served as the unofficial advisor to the Lawrence family. She has worked with the London Voluntary Services Council, Carnival Liaison Committee, and the Greater London Action in Race Equality and has been an active campaigner for justice in the field of race relations.
15