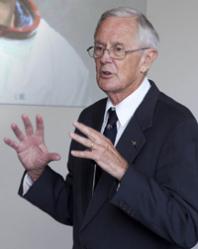 Commercial Property
More than 70 guests, including Buckingham Mayor Hedley Cadd and members of the local business community, saw Mr Duke (pictured) unveil a plaque in the development’s Japanese-style garden to commemorate the occasion.
He then gave a fascinating and detailed insight into his mission as part of the Apollo 16 crew in 1972. Mr Duke spent a total 71 hours on the moon with mission commander John Young.
Previously he was Capcom (Capsule Communicator) in Houston for the Apollo 11 mission, speaking to Neil Armstrong and ‘Buzz’ Aldrin as they became the first men on the moon.
Mr Duke said: “I’m delighted to be here today and to play a part in the launch of this very impressive office development. This year is the 40th anniversary of the first moon landing and it pleases me that the Apollo space programme continues to fascinate and inspire new generations”.
Robert Synge, of Apollo Office Court creators Apollo Developments, said: “We’re honoured that Charlie has been able to take time out from his busy schedule to join us and make our launch event such a huge success.”
The development, in Radclive Road, Gawcott, is a scheme of  20 high-tech, energy-efficient units for small businesses.
Five units remain available for sale or rent and interest is high, Mr Synge added.
19