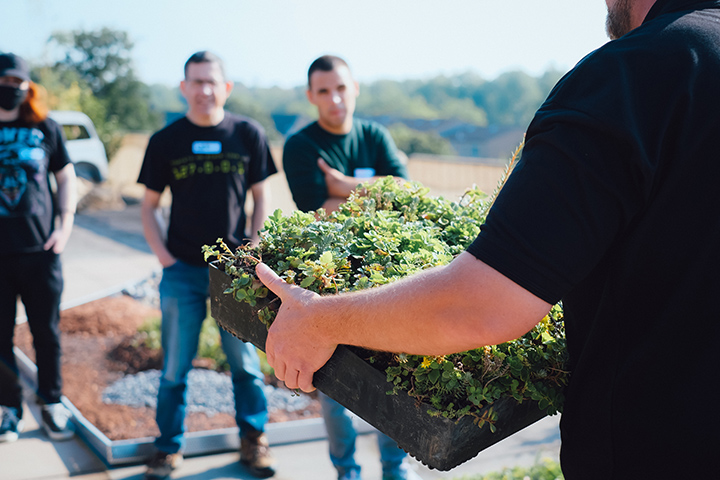 Schemes can save millions and the UK can lead the way, says expert

AN EXPERIMENT in Milton Keynes to measure the effect of living roofs on temperature control and energy consumption of buildings achieved more in a weekend than the industry has achieved in 20 years, says one of the UK’s leading experts on green roofs.

Technology experts fitted temperature-measuring devices to the roof of Saxon Court in Central Milton Keynes to test the variation as a result of covering part of the roof with a roof garden of tightly packed plants.

The results confirm that a living roof maintains temperature rather than leave building roofs open to the elements and therefore greater fluctuations. Now is the time for Milton Keynes to lead the UK in the creation and development of green roofs, with the MK Roof Greening project being backed by city centre-based organisations including centre:mk, MK Gallery, the new YMCA campus and Milton Keynes Community Foundation.

Available roofspace in Central Milton Keynes alone is the equivalent to the area of six football pitches, green roof expert Chris Bridgman told a meeting of the technology forum Biztech. “We need more green space, we have the space here and we can begin the green roofs tomorrow,” he said.

Chris Bridgman: ‘We need to get real focus and real data about the UK market’.

London has capacity for 1.5 million sq ft of green roof on its buildings with almost a third of it capable of having a green roof built immediately, he added.

Mr Bridgman is one of the UK’s leading experts on green roofs. He is vice chair of the Green Roof Organisation, an independent not-for-profit trade association representing the UK green, blue and biosolar roofing industries and founded the annual Green Roof Day, which takes place in June and last year attracted participation from 62 countries.

His company Bridgman & Bridgman has installed living roofs at London’s Olympic Park, Terminal 5 at London Heathrow Airport and at the University of Brighton. The company also installed a green roof on a flood defence system on the Humber at Hull.

But Mr Bridgman is frustrated at the extent to which the UK lags behind other countries in green roof installation. Here, around 250,000 sq metres are installed each year. In Germany, the figure is eight million square metres.

“It is a huge market,” Mr Bridgman told delegates at the Biztech meeting, held at Bouverie House in Central Milton Keynes. But the UK must take advantage of technology as it becomes available, as shown by the results of the Hackathon in September last year. Its findings revealed that a green roof can extend a roof’s lifespan by up to three times due to rainwater retention and a reduction in carbon dioxide and air temperature.

“We need to drill down into this and get real focus and real data about the UK market,” Mr Bridgman said. “The industry is growing at 17.5% a year and we need to do more. We are not pushing and the technology can help us to do that.”

Mr Bridgman advocates an improved training programme to school the green roof installers of the future in order for the market to develop. Bridgman & Bridgman has already set up a training programme, with one apprentice now set to start as head of the company’s nursery growing the plants it will use on future installations. “We feel it is better to grow our own than import from Europe,” Mr Bridgman said.

Three residents of the YMCA in Milton Keynes joined the installation of the green roof on top of Saxon Court to learn the trade and prepare for the roof’s transfer to the roof of the nearby YMCA campus.

“There is so much talent out there,” said Mr Bridgman. “It is about giving them the opportunity. We need to invest in our future workforce.”

Milton Keynes Council is backing green roof initiatives but Mr Bridgman called for greater support at a national level. “Green roofs are new to the UK because we are quite slow to catch on,” he said. “Don’t forget that the first green roof was the Hanging Gardens of Babylon.”