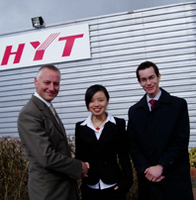 HYT Telecommunications has relocated its wireless communications business, which specialises in two-way radios, mobile radios and trunk systems, from Burton-on-Trent to a 1,650 sq ft light industrial unit at Kiln Farm.

The Milton Keynes company is a subsidiary of HYT Science and Technology Co Ltd – the largest manufacturer, developer and supplier of wireless two-way radio communication technology in China and among the world’s top five in the two-way radio industry.

The Milton Keynes office will become HYT’s European headquarters as the company expands on to the continent.

HYT spokeswoman Maggie He said: "We wanted a base in a dynamic city near to London, with a good business network and convenient transportation. We really love Milton Keynes so the decision to relocate here was an easy one."

The relocation was handled through commercial agents Douglas Duff.

Pictured: Maggie He with Grant Seeley (Left) and Jonathan Whittle, of Douglas Duff.