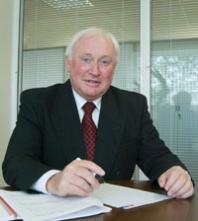 Bedford
He had been suffering from cancer and died peacefully at home, aged 63.
Friends and business colleagues have been paying tribute to Mr Douglas (pictured), who was also a director of the Bedford Development Agency and had been due to become High Sheriff of Bedfordshire this year.
Mr Douglas moved to Bedford in 1972, founding the commercial division for Kilroy Estate Agents Ltd, which became the leading commercial surveying practice in the town.
His close friend and business partner,Chris Kilroy said: “Roy was a real gentleman and a true professional, and will be very deeply missed as he was held in high regard not only in Bedford and Milton Keynes but throughout the whole industry nationwide. He was extremely popular and had the capability and business acumen to build up a very successful business.”
David Tillison, a colleague at Douglas Duff, said: “Roy was very well respected in the industry, known as a tough but fair negotiator, and always looking to obtain the best deal for his client."
David Louch of Douglas Duff’s Milton Keynes office said: “Roy had always been determined not to be beaten and rose to any challenges which appeared insurmountable, and it is this quality he instilled with those he worked with which made him such a successful agent and manager.
"He had worked tirelessly to promote Bedford and inward investment into the town at a time when the competing centres of Milton Keynes, Northampton and Peterborough were receiving significant amounts of government investment and much of the commercial infrastructure and economic success of Bedford, as now exists, has been brought about because of his efforts and energy.
"He will be sadly missed at Douglas Duff and indeed throughout the surveying world”.
Mr Douglas will be much missed by his colleagues in the business world as well as his many friends and family. He leaves his widow Shirley, his two daughters Claire and Sally and grandsons Oscar and Ernie.
His funeral will be held on May 13 at 2.30pm at Bedford Crematorium. Family flowers only, but if wished, donations may be made to St John’s Hospice, Moggerhanger, or to Marie Curie. Please send donations to AL & G Abbott Funeral Directors, 150 Bedford Road, Kempston, Beds, MK42 8BH.
20