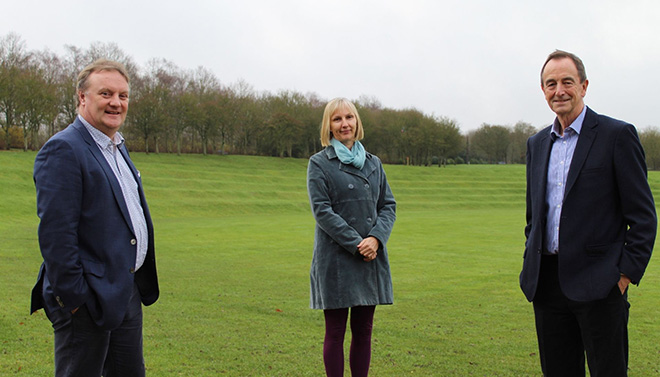 THE CHAIRMAN of The Parks Trust, which manages more than 6,000 acres of parkland in Milton Keynes, is to step down.

Richard Forman, who has been on the board for 12 years, has come to the end of his term as chairman.

He will be succeeded by the board’s current vice chair Zoe Raven. Nick Lloyd, chair of law firm EMW, replaces her as vice chair.

Mr Forman was appointed chair in 2014 after three years as deputy. During his time on the board The Parks Trust has seen significant growth both in terms of the area of green space under its management and in the size of its investment funds which in turn fund the work of the charity.

Other accomplishments over this time include the events and activities offered by the Trust which have grown substantially and in 2014, The Parks Trust opened its Education and Visitor Centre at Howe Park Wood, which has seen over 2,000 people take part in events and our education programme.

Mr Forman, a director of the Fevore Group, said: “It has been a privilege to have been able to serve The Parks Trust over the last 12 years and a pleasure working with an outstanding and motivated group of trustees and senior management.

“This is my second recession while at The Parks Trust and I am pleased that since the first we have been able to rebuild our endowment and to make this more resilient. This is the key to our charitable purpose of providing inspirational parkland for everyone in Milton Keynes to enjoy, the value of which has been particularly evident in this year of Covid.

“It also enables us to pursue more ambitious projects, a vital one at the moment being supporting the council in its 2050 vision to try to ensure that the expansion areas in Milton Keynes enjoy the same access to high quality, interconnected and well-maintained green spaces as in the original city boundaries.”

In 2016, The Parks Trust secured Heritage Lottery Funding for the development of Great Linford Manor park. This funding will be used to ‘Reveal, Restore and Revive’ the park’s important heritage.  Also in 2016, the Trust completed a floodplain forest at Wolverton which is now visited from far and wide by nature lovers.

Willen Lake has received major investment and has expanded its facilities and is now in the process of building a brand new watersports centre. The Trust even received some royal recognition when Richard and the team welcomed the Duke of Cambridge to Campbell Park in September 2018 as part of a special visit to celebrate Milton Keynes’ 50th birthday.

The Parks Trust chief executive David Foster said: “Richard has given the Trust fantastic leadership and direction and has helped to ensure we have stayed focused on our core purpose of providing beautiful and inspirational parks that are enjoyed by more people every year. His commercial expertise has helped place us on a sound financial footing and we and the residents of Milton Keynes owe a huge debt of gratitude to him.”

His successor Zoe Raven has worked in Milton Keynes since 1983 and has experience in business and of multi-agency working and partnerships between organisations. She has a long-standing interest in environmental issues and is chief executive of Acorn Early Years Foundation which she started in 1989 and has since expanded to 13 nurseries.

Mr Lloyd, who succeeds her as vice chair, has worked in Milton Keynes for over 20 years and has a huge appreciation for the parks and green spaces in the city. Nick joined as a trustee in 2018.

Ms Raven said: “I am thrilled and honoured to be taking on the role of chair at The Parks Trust, particularly in a year which has highlighted, more than ever before, the critical importance of accessibility to green spaces.

“It is a huge privilege to lead the board forward at a time of serious financial and environmental challenges, and I am grateful to Richard for being such an excellent role model in his chairing of the board over recent years.”