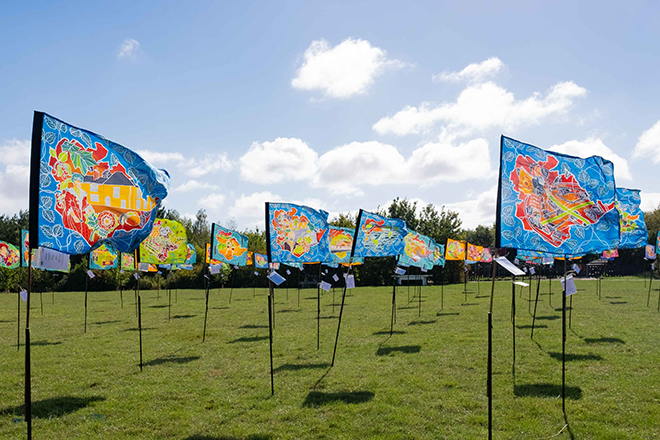 THE JOINT venture behind the planned new era for the former council offices in Central Milton Keynes have been named as the official Community Engagement Partner of IF: Milton Keynes International Festival 2021.

The festival begins next week and First Base and Patron Capital, which are to develop the Saxon Court building in Avebury Boulevard into a multi-use business, leisure and residential hub, are set to support community art at the MK Mandalas: Flag Making Workshops.

The free creative workshops, which take place in Campbell Park on July 16-18, invite people of all ages to make a flag to take home. the workshops are inspired by the MK Mandalas: Kinetika Flags project which has engaged more than 150 people over the past few months to create large silk flags that will be on display at the MK Rose in Campbell Park during the Festival.

The overriding themes of the MK Mandalas project and the workshops – Coming Together, Going Outdoors, Saying Thank You, Appreciating Nature and Looking Forward – link to the vision for Saxon Court, say the developers.

“We are delighted to be named as the official Community Engagement Partner for IF: Milton Keynes International Festival 2021,” said Liam Ronan-Chlond, head of engagement and social value at First Base. “Throughout the entire consultation process for Saxon Court we have engaged with communities across Milton Keynes and it has been heart-warming to experience the unique creative and innovative spirit which embodies each one, and we look forward to taking an active role within the Festival.”

Extended to 21 days this year, IF: 2021 will run from July 10 to July 30. The longer run is designed to give Festival-goers more time and space to enjoy events in the city’s green spaces and parks, public squares, and larger indoor spaces, as well as online. For further information visit https://ifmiltonkeynes.org/

Festival director Monica Ferguson said: “We are delighted to welcome First Base as the Festival’s Community Engagement Partner to work together to engage people in the Festival and to take part in creative Flag Making.

“The workshops accompany one of the Festival’s key projects – MK Mandalas – which has been inspired by Milton Keynes and its people. We are looking forward to seeing the range of designs and flags that people attending the workshops will create to take home.”