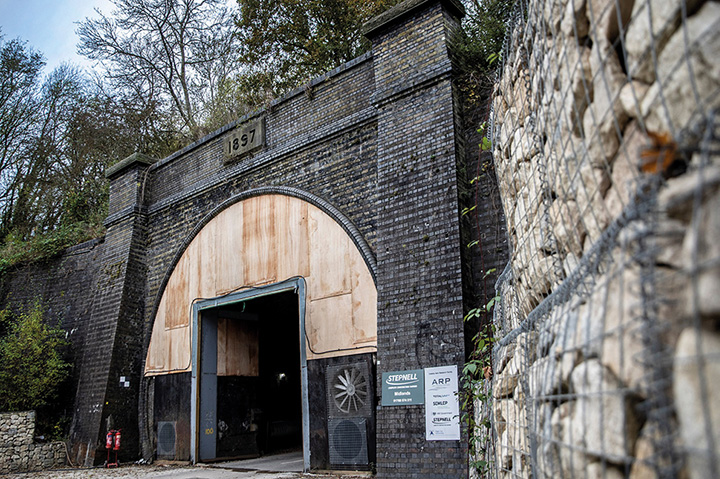 IT HAS stood idle for more than half a century, a Victorian railway tunnel having reached the end of the line.

Now the finishing touches are being applied to the tunnel transformed into the Catesby Aerodynamic Research Facility, set to become a unique indoor world-class vehicle testing centre.

Modern-day engineering has converted the tunnel on the Catesby estate at Charwelton near Daventry into a super-flat road surface almost 3km long, perfectly straight and capable of testing vehicles in ways to improve their performance.

The project has been developed by Brackley-based Aero Research Partners, which has developed the £6 million project since 2013.

£4.2 million of the cost came from the government’s Local Growth Fund, delivered through the South East Midlands Local Enterprise Partnership, and Business and Construction Minister Lee Rowley has added his praise to the project.

Speaking on a tour of the site, he said: “This new testing facility represents another example of fantastic British construction and ingenuity, turning a long-disused Victorian railway tunnel into a 21st-century, state-of-the-art car testing facility here in Northamptonshire.

“It has been terrific to see first-hand the impressive engineering and workmanship that has gone into getting the new testing facility ready.”

During his visit, the minister heard how the facility is more accurate and efficient than a wind tunnel and will give the UK a unique proposition in automotive and race car development. It expects to attract interest from all over the world.

Now in its final stages, once ARP has undertaken its own commissioning and trials, construction firm Stepnell – which has built the CARF – will then return to lay the final asphalt layer, the last operation before vehicle testing happens.

“Coupled with this, we have delivered the vehicle reception building at the mouth of the tunnel, offices at the site of the old station, access track to the facility, strengthening works to an old railway bridge and connected the project to the road network.”

Catesby Tunnel began construction as a Victorian railway tunnel in February 1895 and was completed two years later. The railway line was part of the Great Central’s ‘London Extension’, with the first train running through in July 1898. The railway tunnel was in service for 68 years until its operational retirement in September 1966. It was built because Catesby Estate owner Henry Attenborough objected to unsightly trains passing through the landscape. Some 30 million bricks were required to construct the perfectly straight 2.7-km long tunnel.

The project was made possible after West Northamptonshire Council purchased the tunnel from the Department for Transport and has leased it to ARP. There are also plans to build a science and technology park next to the tunnel.

ARP director Rob Lewis said: “We are very pleased to take possession of the tunnel from Stepnell who have worked closely with us and led a professional team of great subcontractors to successfully complete the civil engineering and building works.

“The Stepnell team have converted the tunnel from a wet hole in the ground to a pristine running surface that allows sophisticated vehicle testing.  ARP will now fit out the building, install telematics in the tunnel and complete testing of our procedures before opening once the wearing course has been laid.”

Mr Wakeford added: “We are extremely proud to be part of such a fantastic and significant project not only for the East Midlands but also for the worldwide automotive testing industry.”