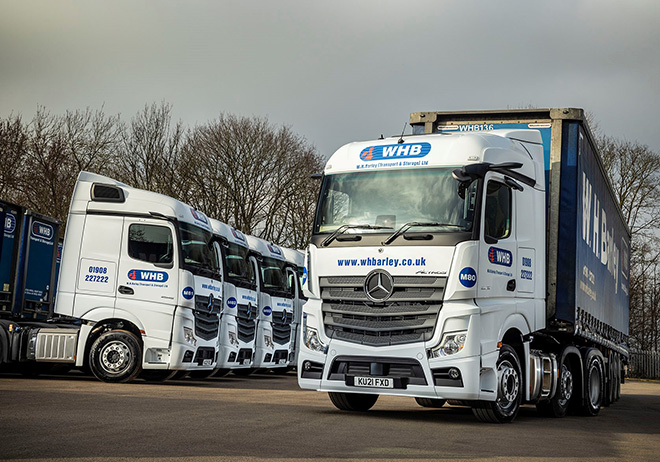 A DISTRIBUTION and logistics company has taken delivery of ten new trucks to take its fleet to more than 70 vehicles.

WH Barley, based at Old Wolverton in Milton Keynes, has already put the vehicles to work on its service to clients in the retail, wholesale and health sectors.

The company’s fleet of more than 70 tractor units and rigid trucks includes another 16 vehicles by Mercedes-Benz. The new Mercedes-Benz Actros are its first ordered since 2018.

They came equipped as standard with innovative MirrorCam technology. This replaces conventional mirrors with rear-facing cameras that relay their images to screens mounted inside the cab, on the A-pillars.

The vehicles also include Mercedes-Benz Trucks’ latest version of the Predictive Powertrain Control system. It improves fuel efficiency and WH Barley’s drivers also have the Multimedia Cockpit interactive system aboard.

WH Barley director Emma Barber, whose father Peter established the business in 1970, said: “We have been running a pair of Actros tractor units for the last three years and they have been exceptionally reliable, economical and popular with our drivers.”

The company has had a long-standing relationship with the Milton Keynes dealership of Intercounty Truck & Van, which successfully pitched for the order against stiff competition.

Ms Barber added: “Other manufacturers have raised their games too, though, so this latest order was definitely ‘up for grabs’. The fact that we have chosen to put our faith in Mercedes-Benz is largely down to the very impressive presentation and attentive, professional customer service, as well as the attractive contract hire rates.”

WH Barley carries out a range of delivery services across the UK and beyond. It also boasts 100,000 sq ft of secure warehousing on its five-acre site at Old Wolverton. The business has high hopes for its new trucks’ ground-breaking technology, said Ms Barber.

“Fuel efficiency is crucial. While our established Actros deliver excellent returns, we are looking forward to seeing the additional contributions that MirrorCam and enhanced Predictive Powertrain Control can make toward reducing running costs.

“The camera housings give the trucks a clean, modern appearance too and I have no doubt that equipment of this kind will become the norm before very long. We will also be gauging how much it helps our drivers in their day-to-day work but the initial feedback has been very encouraging.”

Ms Barber is a director of the Road Haulage Association, of which her father Peter is a former chairman. She is also chairman of the RHA’s Southern & Eastern Regional Council and vice-chairman of its Transport, Warehousing & Pallet Distribution Group.

WH Barley is also a member of The Transport Association and holds the Fleet Operator Recognition Scheme’s Silver accreditation.