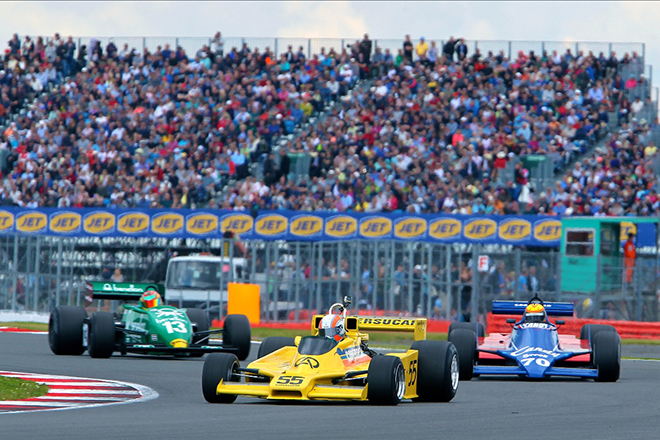 2 pairs of tickets to the final day of Classic Silverstone to be won in this great competition in association with Silverstone Circuit.

The Classic is a Silverstone favourite for families and race fans alike, a weekend-long action-packed summer staycation, taking place this year on July 30-August 1.

And you and a friend can be there on the final day. Business MK and its sister publications MK Pulse, Business Times and NN Pulse have two pairs of tickets to give away in conjunction with Classic Silverstone in our exclusive competition.

The star-studded races feature historic cars from across the last 100 years of motorsport racing wheel to wheel, representing the golden ages of Formula 1, Formula 2, GT, Sports and Touring Cars.

With grandstand seating included in the admission ticket price, everyone is on pole position to spectate. Visitors also have free access to the vast majority of the entertainment including funfair rides, driving experiences, stunt shows, the concerts and both racing paddocks.

The event’s charity partner Alzheimer’s Research UK is offering ‘behind the wheel’ simulators as part of its fundraising activity. And Sporting Bears, a motor club dedicated to raising funds for children’s charities, is running passenger rides in beautiful classic cars on the country roads around in return for a donation.

The Young Driver scheme gives children aged from ten to 17 their first taster driving experiences behind the wheel of a brand new dual-controlled Vauxhall Corsa, for just £5. Budding young football stars aged between five and 15 can prepare for the new soccer season under the expert guidance of Chelsea FC Foundation coaches at the Yokohama Chelsea Skills Zone.

The unrivalled schedule of races featuring legendary machines from motorsport’s golden eras is at the heart of The Classic. And this year’s programme is the best-ever.

Vehicles with special milestones to celebrate will take to the famous track for impressive parades. This summer’s highlights include a record gathering of Triumph Stag, celebrating its 50th birthday. The DeLorean also turns 40 this year and the icon of the big screen will be out in force at this year’s event. Also celebrating its 50th birthday will be the stunning Lamborghini Countach.

These iconic cars are joined by an intriguing collection of the UK’s rarest cars as featured in The Telegraph.

To win a pair of tickets to Classic Silverstone on Sunday August 1, email the answer to the following question to news@businessmk.co.uk, along with your name, email address and daytime telephone number. The deadline for entries is Sunday July 18. Our usual competition rules apply and the editor’s decision is final.

QUESTION: Which national charity is the charity partner of this year’s Classic Silverstone event?

There is a feast of entertainment on the live music stage including pop-rockers Scouting for Girls, Britpop Reunion and Pearl Jam tribute act Legal Jam on Friday night with The Brand New Heavies and Aswad rocking it at Saturday night’s party.

General admission for adults starts from £47 with the price of full three-day weekend tickets £125. Free admission is offered to accompanied children aged 10 and under while day tickets for those aged between 11 and 15 are priced from just £6.

All tickets carry a Covid booking guarantee, which means that if Silverstone is prevented from allowing spectators at 2021 events due to a change in current government guidelines, all ticket-buyers will have the option to either transfer their ticket to the following year or receive a full refund.

Full details of tickets for The Classic 2021 at Silverstone can be found at www.silverstone.co.uk/events/the-classic