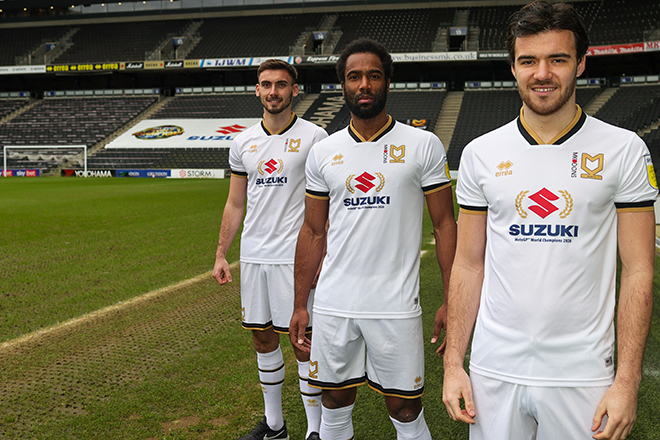 WHEN the players of MK Dons FC run out at Stadium MK on Saturday (February 27), they will be celebrating a world title triumph.

The club is celebrating the 2020 MotoGP world title success of the Dons’ main sponsor Suzuki and rider Joan Mir by wearing commemorative shirts for their fixture against League One rivals Oxford Utd.

Mir became the sixth rider to win the biggest prize in motorcycle racing with Suzuki – Britain’s Barry Sheene first took the premier class world title for the Japanese manufacturer in 1976.

Mir’s unerring consistency in 2020 saw him claim the title with a round to spare in only his second season in the top flight.

The special team shirt – modelled by Dons first-team players Cameron Jerome, Scott Fraser and Warren O’Hara – features the usual Suzuki logo on the front adorned with a wreath and the line ‘MotoGP World Champions 2020’ positioned underneath.

Suzuki GB director Paul de Lusignan said: “We enjoy a great relationship with the MK Dons and it is going to be very special to see our MotoGP world championships celebrated on the front of their shirts this weekend.

“In MotoGP Joan Mir lifted the rider’s title while Team Suzuki was able to win the team championship. We hope the MK Dons can achieve success this weekend in the commemorative shirt and we have something to celebrate together.”

Suzuki has sponsored the MK Dons since 2014, with the SUZUKI logo on the front of the playing kit and around Stadium MK. The company, whose GB headquarters are in Milton Keynes at Snelshall, also invest in the MK Dons community initiatives, providing support for the women’s team and the many inclusion and disability activities run by the MK Dons Sport and Education Trust.

MK Dons commercial manager Andy Wooldridge said: “When speaking to the team at Suzuki, I can sense the immense pride that everyone there has in this achievement. We are pleased that we are able to show our support of this and raise money for local causes at the same time.”

After the game there will be opportunities for MK Dons supporters and MotoGP enthusiasts to win some of the match-worn shirts in a special charity draw, with funds generated going to the MK Dons Sport and Education Trust as well as the Milton Keynes Hospital Charity.