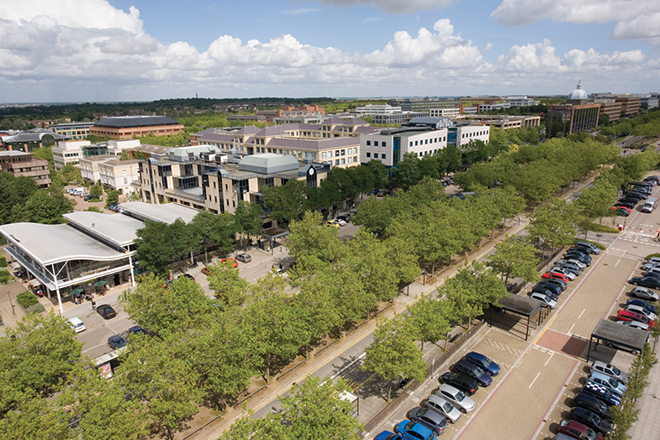 COLLEAGUES at a regional law firm have bade farewell to its partner and head of construction, who has retired after 25 years with the practice.

Tim Richards acted on many major cases, most recently advising clients on both the contentious and non-contentious aspects of building and engineering projects for both public and private sector clients. he has also been a member of the firm’s charity and education and banking and finance groups.

“It is very satisfying to be able to walk around Milton Keynes, Northampton and Cambridge, where Hewitsons has offices, and see the tangible results of projects you have worked on and think ‘I worked on that’,” he says.

He started his ‘articles’ at a Birmingham firm in 1983, naming technology being one of the greatest changes he has seen in his career – when fax machines and manual typewriters were the norm. Mr Richards moved to Hewitsons’ office in Cambridge as head of construction, applying for the post as a result of conversations with  the firm’s former partner Niel Ackermann when the two were team mates in the Law Society rugby team.

“Foresight by Lewis Isaacs and Charles Hewitson, among others, dictated that Hewitsons needed a specialist team dealing exclusively with both contentious and non-contentious construction law. It was not long before we got approval to recruit a further solicitor into the team and a young Colin Jones joined us.”

Mr Jones is now the firm’s managing partner. “We both had very much more hair in those days,” says Mr Richards.

A chance meeting after delivering a talk at a construction industry forum led to him leading the country’s first street lighting private finance initiative project and only the second PFI project where the procuring authority was a local council.

“This matter, a lighting project in Brent, would completely takeover my working life for the next 18 months,” Mr Richards says. “Overnight, I had to become an expert in PFI negotiating the project agreement. There is no way I could have done it without the combined forces of many other very good lawyers across Hewitsons, including some that are still at the firm today.

“There were many late nights and the night before financial close I spent in the office in Cambridge drafting the subcontract and speaking to counsel on the telephone. Without going home, I took an early train to London to attend the completion meeting.

“Little did I know when I was negotiating that transaction that, 18 years later, when the contract was coming to the end of its 20-year term, that the client would reinstruct us to advice on the provisions we had drafted all those years earlier dealing with warranties and transfers of rights.

“That is perhaps a lesson for those starting out on their careers that things can, and often do, come back to haunt you.”

He moved from Cambridge in 2008 to head Hewitsons’ new Milton Keynes office and moved the focus of his practice more exclusively to cover both that area and Northampton. “We have put Hewitsons on the map in Milton Keynes, largely due to the fact that we always punch above our weight in terms of delivery and client service,” he says.

Mr Richards was born in Colchester, raised in Surrey and now lives with his wife Katrina in Abbotsley, near St Neots. He plans to spend his retirement on DIY projects and improving his golf handicap.

Hewitsons has appointed construction partner Simon Wain, also based at Milton Keynes, as his successor.

Managing partner Colin Jones said: “It is with an extremely fond farewell that we say goodbye to Tim as he begins his retirement.  A more dedicated, determined and hardworking colleague it is not possible to identify.

“From founding the construction team, taking me on as an assistant in the team – an extremely sensible move – setting up and running our new office in Milton Keynes, heading the real estate team to his involvement in the firm’s fundraising initiatives and events and with a period on our management board, Tim has always given 100% and played a considerable part in the development of our firm.

“I know I will not be the only member of the firm who will miss Tim, on both a personal and professional level.

“Looking to the future, Hewitsons has a strong and solid team of absolute professionals and we know that Tim’s successor, Simon Wain, will excel in his new role.”