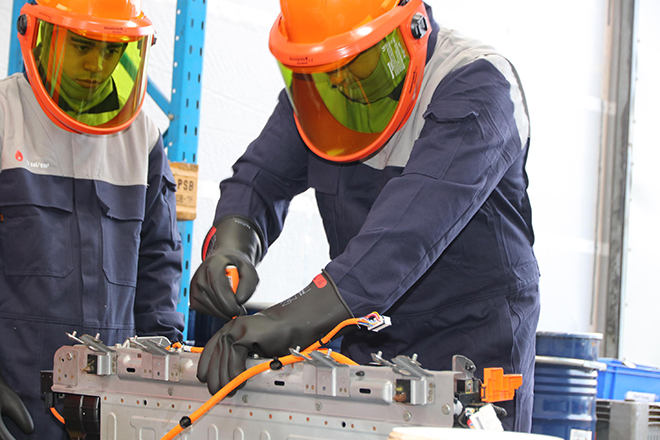 A RECYCLING specialist has sealed a partnership deal with the UK’s new facility developing the battery technology of the future to handle its waste management programme.

Cawleys, whose headquarters are in Luton, has begun work with the UK Battery Industrialisation centre, a publicly funded £130 million 18,500 sq metre battery development production facility, which is due to become fully operational later this year.

The centre allows organisations in the UK to prove whether their promising technologies such as electrode and cell materials, battery modules and packs can be manufactured at the required volume, speed, performance and cost to be commercially successful.

The new partnership will involve Cawleys collecting lithium batteries and hazardous and non-hazardous waste and recycling produced during the manufacturing process.

Alan Colledge, head of Cawleys’ lithium battery recycling division, said: “We are delighted to have been selected as a battery waste partner for UKBIC.

“We have been working on methods to safely collect, transport, store, dismantle and recycle lithium batteries for many years now and it is fantastic that our preparation and research has been recognised by such an important organisation.”

Cawleys is one of very few privately owned companies currently able to recycle lithium batteries, particularly those from electric vehicles. The firm has expanded in recent years to encompass the compliant collection, storage, dismantling and recycling of the lithium batteries.

The process extracts the precious elements found in the batteries, enabling them to be recycled and reused.

As electric vehicles become the norm, the demand for lithium battery production will increase dramatically, the firm says, and sustainable production that includes the reuse of recycled precious metals and elements will be vital.

The UKBIC, based in Coventry, provides the missing link between battery technology which has proved promising at laboratory or prototype scale and successful mass production. Funded by the government, the battery product development facility can be used by any organisation with existing or new battery technology that would bring green jobs and prosperity to the UK.

The centre is part of the government’s UK Faraday Battery Challenge, a £318 million investment  in research and innovation projects and facilities to drive the growth of a strong battery business in the UK.

UKBIC’s director of human resources Damian Pearce said: “The importance of the recycling of batteries cannot be overstated, something we at UKBIC see as a key part of the Faraday Battery Challenge’s objective of fast tracking the development of cost-effective, high-performance, durable, safe, low-weight and recyclable batteries.”

Mr Colledge added: “With the government committing to phase out the sale of new petrol and diesel cars by 2030, electric vehicles are becoming increasingly important to our way of life. Ensuring the batteries that power them are sustainable and can be disposed of safely or recycled is vital.”