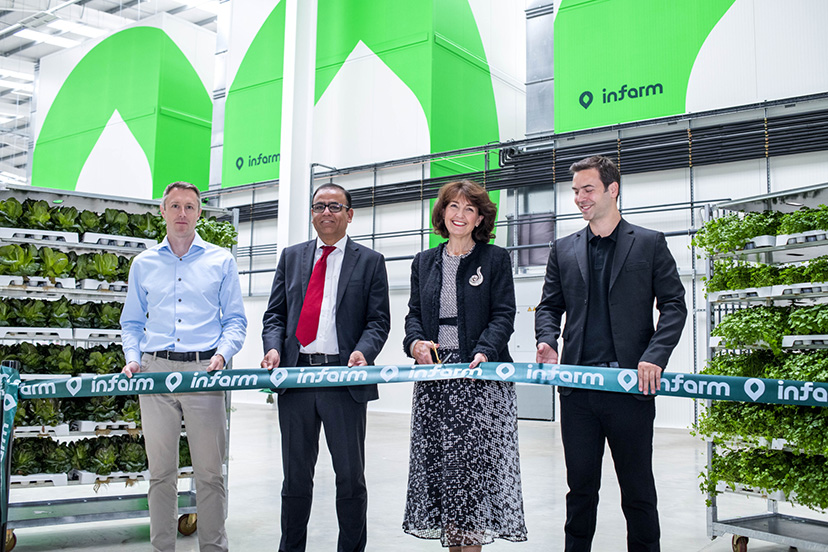 Infarm’s first high-capacity Growing Centre, now operating on the Elms Industrial Estate, is set to play a major role in the UK’s food strategy and will be a boost to the local economy.

Jo Churchill, the government minister for agri-innovation and climate adaption at the Department of Food and Rural Affairs, and Bedford MP Mohammad Yasin joined Infarm executives and staff for the official opening. They are pictured with Infarm chief executive Erez Galonska (right) and UK country director Jeremy Byfield.

The facility measures 10,000 sq metres and accommodates up to 40 Infarm cloud-connected farming units, each standing ten metres high. Each unit can grow more than 500,000 plants per year – the equivalent of a football field worth of crops.

Speaking at the opening, both MPs stressed the importance of ensuring a domestic food production that goes with the security of offering UK’s population fresh produce and caring for the environment through innovative and outstanding technology.

Ms Churchill said: “Infarm is capable of producing up to 20 million plants across the UK every year and its new facility in Bedford will be a fantastic boost for the local economy. We want to be world leaders when it comes to innovation.”

The government’s Food Strategy aims to boost food production and the government is spending £270 million on unlocking innovation in agriculture. “Infarm is a great example of innovation being used to enhance productivity,” the minister said.

Mr Yasin said the UK’s over-dependence on food imports left the country at risk from soaring prices and food insecurity. “I am really excited that Bedford is now home to one of Europe’s largest vertical farming facilities at the forefront of new ways to grow more food domestically,” he added.

“The prospect of growing food with a low carbon footprint, without the need for chemical pesticides, using the latest in green technologies is very promising and it is great that Bedford can play its part in bringing food closer to the people on a scale that might one day feed the nation.”

Each Infarm Growing Centre uses 95 per cent less water and land than traditional agricultural methods and saves thousands of food miles. The location of the new Bedford facility means that, fully equipped, it can serve 90pc of the country’s population within a four-hour drive. Uniquely, the Growing Centre in Bedford will implement rainwater harvesting. The further estimated 2.5 million litres of water captured by this technique every year will be used for conditioning the plants.

The new Growing Centre in Bedford will be part of Infarm’s expanding global network of vertical farms. By the end of 2030, Infarm plans to expand to 20 countries. Every vertical farm is connected to a central farming brain which gathers data constantly to improve plant yield, taste, and nutritional value, while further reducing the use of natural resources.

Infarm’s chief executive and co-founder Erez Galonska said: “The Infarm Growing Centre in Bedford enables us to increase the amount of fresh produce grown locally in the UK significantly. The opening of this UK facility is aligned with our goal to change the food system for the better by improving the safety, quality and environmental footprint of our food.”