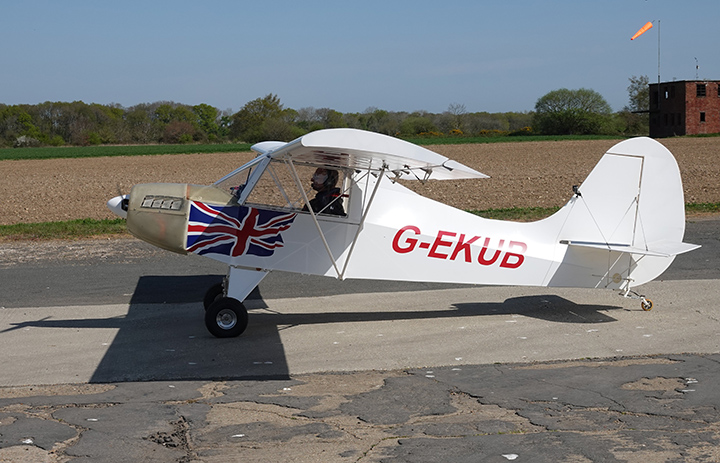 IT IS being hailed as a milestone in the journey towards electric aviation. This aircraft has completed what is thought to be the first flight by a British-designed and built, all-electric conventional aeroplane.

After taxi tests and “low hops”, the single seat Sherwood eKub made its first flight of ten minutes and then a second flight later in the day of 22 minutes from Little Snoring airfield in Norfolk.

At the controls was Dr Guy Gratton, associate professor of aviation and the environment at Cranfield University and an Associate Fellow of the Society of Experimental Test Pilots. He is is also programme manager for the Enabling Aircraft Electrification project.

“The aeroplane flew very much as predicted from our analysis and ground tests,” Dr Gratton pictured said. “This is a new way of flying and we are at the start of a steep learning curve on electric flight.

“The support from everybody on the team, as well as colleagues, funders and authorities has been fantastic in making this possible. As a test pilot, an aeronautical engineer and as a researcher, learning all about this new class of aeroplane is one of the most exciting things I have ever done.”

Watch a video of the flight here.

The eKub has been developed by a consortium of Cranfield University, TLAC, Flylight Airsports and CDO². Funded by consortium partners and UK Research and Innovation as part of the Future Flight Challenge initiative, the eKub is part of the broader EnabEl project focused on delivering safe, viable, and environmentally efficient aeroplanes.

Dr Thomas Delaney, project electrical engineer and Cranfield Research Fellow, said: “One of the key outcomes of the project so far is the work that has been undertaken in the background to facilitate the development and operation of all-electric aircraft.

“The eKub has been developed as a learning platform so that the project outcomes can now directly advise microlight builders and aviation regulators on both design best practice and new certification standards for the new era of electrified flight.”

EnabEl is building two all-electric aeroplanes and the eKub flights will be followed by testing of a larger two-seat electric Skyranger Nynja Aircraft being built at Flylight Airsports’ base of Sywell Aerodrome in Northamptonshire.

Paul Hendry Smith, managing director of The Light Aircraft Company which built the eKub and from whose Little Snoring base the aeroplane was test flown, said: “This is clearly a milestone in electrically powered flight and we are delighted to be at the cutting edge.”

Along with consortium partners, EnabEl is also being supported by the Civil Aviation Authority and the British Microlight Aircraft Association.