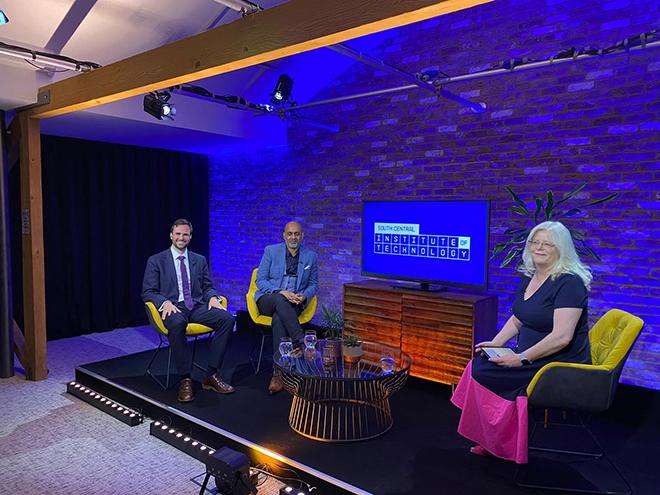 APPRENTICESHIPS and Skills Minister Gillian Keegan has welcomed the opening of the South Central Institute of Technology at Bletchley, calling it “vital” for closing the region’s skills gap.

The minister stressed the importance of the SCIoT being an employer-led initiative and of teaching skills which are in desperately short supply.  “Many businesses today report that 26% of their vacancies they cannot fill, because of a lack of skills and this is a real issue for employers,” she said.

The SCIoT has been established by Milton Keynes College in partnership with some of the world’s biggest companies including Microsoft, McAfee and KPMG and leading local organisations such as  Cranfield University and CCL Evidence Talks.

It will teach cutting-edge tech skills ranging from cloud computing and networking to cyber security. Much of the work students undertake will come from real-life problems faced by the partner companies.

Its aim is to cut the thousands of unfilled tech job vacancies by providing the skills for which companies in the region are desperate.

The minister said: “What better could you get?  Fantastic collaboration between FE colleges, universities and leading employers to focus on those vital skills we are going to need to drive our economic success in the future.”

The SCIoT is a stone’s throw from Bletchley Park, home of the wartime code breakers who themselves were at the cutting edge of that time’s technology and possessed of skills very few people possessed.

Sir Dermot Turing, nephew of wartime codebreaker Alan Turing, the man behind the Park’s wartime success, is also a member of the Anchor Partner Strategy Group at the SCIoT. Bletchley, he said, was a fitting location for such an ambitious project.

“I have always thought of the Bletchley Park heritage side of things as not being a backward-looking thing but a forward-looking thing, being about how we can be inspired by the past to discover a new future,” Sir Dermot said.

“Obviously, as an educational institution part of what you are trying to do at the institute of technology is a very positive way of giving effect to that philosophy.”

Derrick McCourt, general manager of anchor partner Microsoft’s customer success unit, said, “We have a massive skills gap in the world of digital. We are just excited about reigniting further education in the UK and having a new cohort of talented people coming in to our industry to bolster those digital skills needs.”