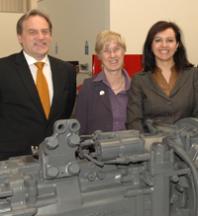 Milton Keynes
Caroline Flint, the Minister for Europe, has visited to the Mercedes-Benz Apprentice Academy in Bletchley. She said the centre exemplified the positive effects of the investment made by in training by the government.
The minister was accompanied on her visit by Dr Phyllis Starkey, MP for Milton Keynes South West.
Mercedes-Benz invested £1.2 million and the government, through the Learning and Skills Council, added £1.7 million to fund the centre which opened in September last year. It provides training for Mercedes-Benz workers in Milton Keynes and across the UK.
Ms Flint said: “The positive links the Labour government has nurtured with Europe means that companies like Mercedes-Benz have expanded in the UK and are committed to providing quality skills and training to UK workers.
“Labour is determined to provide real hope for the future by investing in Britain’s future prosperity now through the talents and skills of the British people. Earlier this year, the government announced funding for 35,000 new apprenticeships across the UK to strengthen this country’s competitiveness. This Apprenticeship Academy in Milton Keynes demonstrates what a positive effect investment like this has.”
The number of people completing apprenticeships in Milton Keynes has risen by 150% in four years, said Dr Starkey. The Mercedes-Benz Apprentice Academy has resulted in 22 jobs, a contract with a local hotel to accommodate the students and another for a local coach company to transport them between the hotel and the academy.
Dr Starkey added: “I fully support the Labour government’s commitment to investing in apprenticeships – it’s important to develop skills so that people are able to compete in an ever changing job market.
“Having the Apprentice Academy in Milton Keynes has gone some way to helping the economy in the town too. It is great to see a European, multi-national, company providing training with Learning & Skills Council money in Milton Keynes – to people from Milton Keynes and across the UK.”
Caroline Flint is pictured (right) with Dr Starkey and Mike Belk, managing director of Mercedes-Benz Customer Services Group.
68