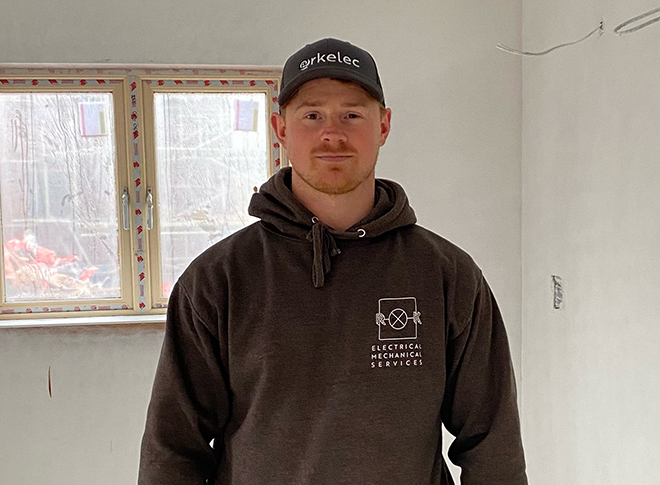 A PARATROOPER who was forced to quit the army due to health reasons says becoming an apprentice electrician was the best thing he could have done to turn his life around.

Michael Parr was discharged from the 3rd Battalion Parachute Regiment after suffering hearing loss in one ear as a result of firing heavy weapons.

Since becoming an apprentice at RK Electrical Mechanical Services in Northamptonshire, he has his feet firmly on the ground… and hopes to encourage others to consider apprenticeships when faced with having to make a career change.

Speaking of his experience as National Apprenticeship Week begins today (Monday), Michael said: “On leaving school I went on to study farming, I had worked on a farm since I was 13 and knew this was something I wanted to do. I studied farm management and worked in the industry for eight years.”

That included two years working in Australia. He then decided the time was right to follow a lifelong ambition to join the Army and in 2014 he took the plunge.

“I went overseas quite a lot on training exercises, completing various parachute jumps. I loved everything about it and was devastated when after just four years I was discharged for becoming deaf in one ear from firing heavy weapons.

“I did not really know what to do – a career in the army was my life ambition. I did not have a back-up plan and I needed one fast.”

Michael decided to retrain to become an electrical engineer.

He said: “I decided to throw myself into a new career. I had excelled in the army and I knew I would excel as an electrician. I could transfer all the skills I had learnt in the army into relearning a trade.”

He asked around and was recommended to contact RK Electrical Mechanical Services, a business based in Desborough that specialises in providing electrical, plumbing and heating services to clients including housing developments, social housing sites and industrial, commercial and domestic properties.

The company offers apprenticeships in electrical plumbing and heating, including gas, to successful candidates on completion of a two-week trial. Michael will complete his second year in March.

“Being an apprentice is so much better than I expected it to be,” he said. “I have had fantastic support from everyone at the firm and I would tell anyone faced with a situation like mine to go with their gut feeling. Don’t let the word ‘apprentice’ put you off.

“As much as I wanted to stay in the Army, I knew that becoming an electrician would be better for my future and the time goes so fast. When I was told I was getting discharged from the Army, I really did not think I would be where I am now.

“I knew a bit about electrics and decided to go for it. I would encourage others to do the same.”

RK Electrical Mechanical Services is currently supporting seven apprentices across both the electrical and mechanical sides of the industry.

Business development manager Kye Bishop said: “Apprenticeships have a key role in helping the UK’s economic recovery from Covid-19 and we are proud to be able to help people like Michael to retrain and upskill.

‘Our apprenticeship scheme supports our commitment to organically grow the business and create our own professional, highly skilled workforce.”

On completion of the apprenticeship programme candidates will have taken the necessary steps to be qualified as either an electrical or mechanical engineer.