Skip to content
16.8°C
05 Jul 2022
x
Latest NewsMarketing & MediaMediaGetting creative: “We are training people to be able to do things rather than just to understand how they are done’ 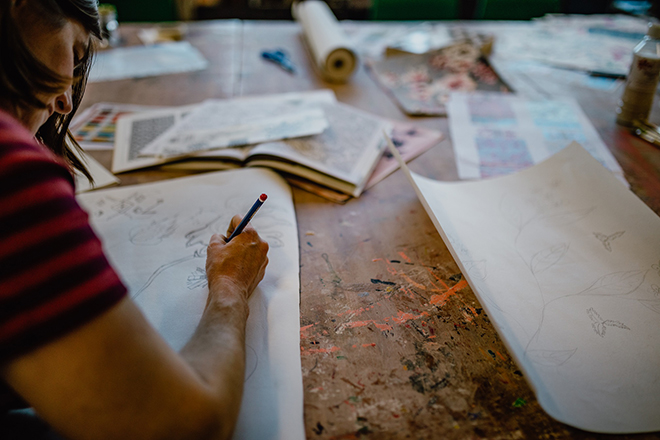 QUALIFICATION in creative disciplines are predicted to be in increasingly high demand in Milton Keynes as investment pours into the Oxford-Cambridge Arc.

The head of school for creative arts at Milton Keynes College, Kate Bashford, says all the evidence points towards a growing demand in the sector

“The government’s plans are around knowledge-based industries, particularly digital, and the links between arts and technology are crucial to that sector’s development. There is a lot of highly skilled design work for example that goes into any business’ online presence.”

The professional and businesses services sector in the area employs two-thirds of all those who qualify as graphic designers and a third of the web designers and developers.

Elsewhere creative industries are described often as the glue which holds so many other kinds of work together.

According to research carried out for the Regional Studies Association, “creative industries may instead best be thought of as a way of linking a number of separate economic and social agendas to give them more coherence.”

The creative industries themselves employ more than two million people and the government says it is providing new job opportunities faster than any other part of the economy.

The college’s links to business are crucial to turning qualifications into careers.  A long-standing relationship with online estate agent Rightmove has seen graphic design students gaining internships with the company producing promotional material like digital banners and posters and several have gone on to be recruited to full-time jobs there.

Former student Rachel Sharp works for the design team. “The years I studied at the college not only prepared me in my skill set but also helped to mould me as a person to equip me for what was to come. Milton Keynes College was the beginning of my journey and the reason I was able to gain the opportunities I did.”

Many students who train in creative industries at the college go on to work in the arts sector itself.

Professional singer Serena Robb studied Performing Arts but soon realised that her strength lay in music so switched courses, eventually leading to her going on to the British and Irish Modern Music Institute where she did a degree in professional musicianship in vocals – something which she says she would never have had the confidence to do if she had not been to college.

“When I first went to college, I had no desire to go to university.  I had it in my head that I was not academic enough to do something like that. I did not even know that music universities existed until tutors told me.”

Now she says she has her, “thumbs in many music pies – solo artist, radio host, A director of MK Fringe, sync writer and wordplay magazine writer.”

Kate believes that the future is bright for well-trained creative people as the country comes out of lockdown, hopefully for the final time

“We have seen already what a desperate thirst there is for fun from people who have been shut away without cinema, theatre, dance, and all those other things which make life worth living.

“People have had a lot of time to think about what they want from life and there is every chance the arts sector will see an explosion of interest as people strive to add that richness to their lives which has been so plainly absent in recent months.”

Subjects available for study at Milton Keynes College include media production, games, animation and visual effects, fashion and textiles, photography, art, graphic design, performing arts and music.  Students learn from industry professionals and the emphasis is very much in the practical.

“We are training people to be able to do things rather than just to understand how they are done by other people,” Kate says.  “Hopefully we are training those people who will be that glue which puts business together and makes them tick – and perhaps the odd star or two of the future as well.”