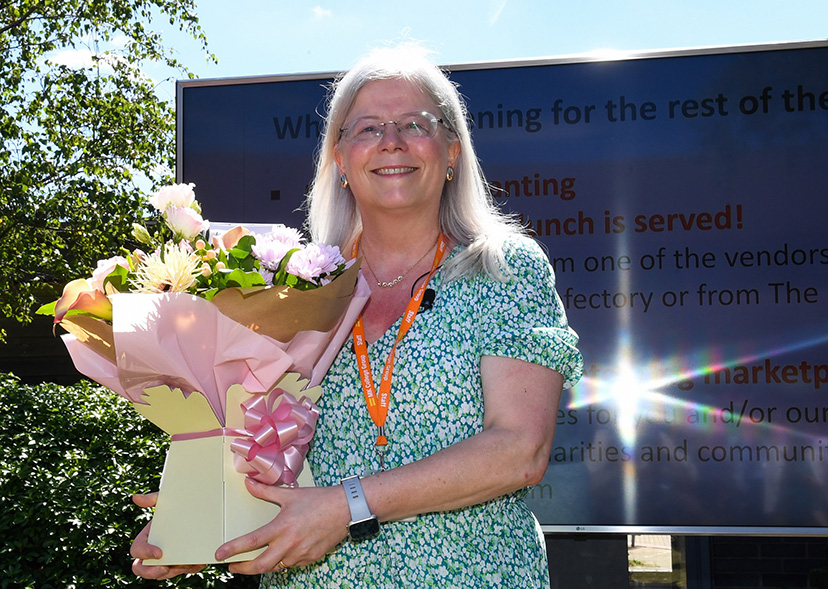 A CAREER spanning 32 years in education as a teacher and leader has come to an end as Milton Keynes College Group said farewell to its principal and chief executive Dr Julie Mills.

As part of the day Dr Mills pictured above planted a tree as part of the Queen’s Green Canopy project to Plant a tree for the Jubilee. The college is planning to plant a total 70 trees on its campuses this year,  one for each year of Her Majesty’s reign.

At Dr Mills’ farewell event, attended by staff and students, the College Group announced it is to fund a new volunteering scheme, the College in the Community Pledge.  Starting in the autumn term, staff will be able to take a day per year, fully paid, helping a cause of their choice.

Dr Mills said: “I’m overwhelmed after such a warm farewell from colleagues, partner organisations and friends. It’s been a privilege to have spent my time here working with passionate, dedicated people who have made incredible contributions to the lives of our students and the wider Milton Keynes community.”

She joined Milton Keynes College in 1990 as a finance lecturer.  After progressing to the role of the college’s deputy head of education at nearby HMP Woodhill, she led a bid for a contract to provide offender learning in prisons around the country.  Milton Keynes College is still one of the key contractors today looking after various institutions.

She has overseen the transformation of the college into a group which beyond further education and offender learning now includes the South Central Institute of Technology at Bletchley, which provides training for 1,000 people a year with the tech skills in shortest supply in the region.

Dr Mills, is a respected thinker and doer in the areas of education, skills, social justice and diversity.  She was formerly named Principal of the Year by the National Centre for Diversity and has also served as chair of the Helena Kennedy Foundation and of Women Leaders UK. She received an OBE in the Queen’s 2019 Birthday Honours List.

Milton Keynes College Group’s deputy chief executive Sally Alexander said: “Julie’s leadership has seen the College Group develop and grow to an extent nobody could have imagined when she first walked through the doors in 1990, or even when she took over as principal in 2011.

“Her hard work and commitment to the institution and the people who work here, staff and students alike, cannot be overstated.  She has no idea how much we’re all going to miss her and we’re all committed to carrying on her fantastic work to build fairer futures in our communities.”

Dr Mills said: “I have no doubt that under Sally’s leadership, the College Group will continue to transform lives in our city of collaboration, innovation and talent.”

Her tree and the 69 others due to be planted will all be native British species including hornbeam, silver birch, rowan and beech.  The college will also have its own orchard for the first time comprising different varieties of apples, pears, plums, mulberries and figs.