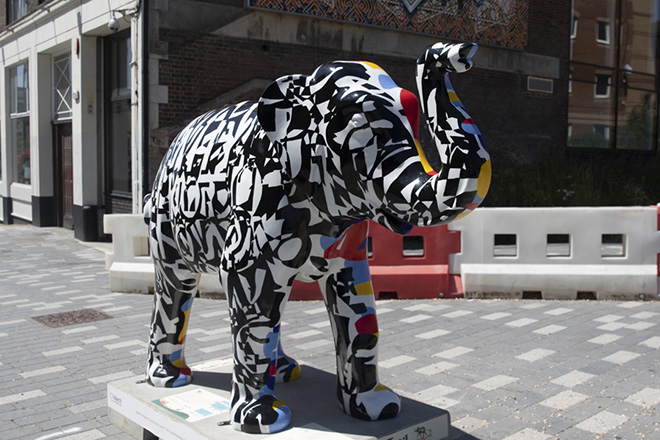 Turner Prize-nominated and Luton-born artist Mark Titchner is the creative talent behind Luton BID’s unique Big Trunk Trail elephant sculpture, which is now in prime position outside The Hat Factory on Bute Street.

Mark already has strong ties with Luton. He created the striking Beacon on the side of the Hat Factory as part of the As You Change So Do I project by Luton Culture and Arts Council England in 2016.

He also designed the impressive The future demands your participation mural with renowned designer Jonathan Barnbrook, also on Bute Street.

Luton BID invested £30,000 over three years in As You Change So Do I and is continuing to promote art and culture in the town centre as the Trail Progress Partner in Keech Hospice Care’s Big Trunk Trail – the biggest public art trail Bedfordshire has ever seen, which trumpeted into Luton’s parks and landmarks on July 10.

Mark explains why he feels so passionate about Luton, the BID, Keech Hospice Care and his elephant design.

Talk us through your concept for the BID’s elephant…

“Over the years I’ve collected lots of research material that I can pull upon for different projects. Lots of these ideas have yet to find a home. I’ve had a photograph on my desktop for a while of women making camouflage netting at Luton Town Football Club during World War 2 and I’ve always really liked the slightly ridiculous idea of camouflaging a large sculpture.

“The invitation to take part in The Big Trunk Trail brought these two things together. I was particularly interested in how, during both world wars, ships were painted in dazzle camouflage –  high contrast patterns that were designed to confuse the enemy. This all came together in the design which you could basically call a dazzle elephant.”

The elephant uses words. What are these?

“My most well-known artwork features the prominent use of words and statements. For The Big Trunk Trail project, my artwork features the question Why not now?  which is different from the statements in my other Luton-based projects – If you can dream it, you must do it and The future demands your participation.

“It’s also a reflection of the year we’ve all just had with Covid, an open-ended question that can have many different meanings and connotations. I like my art to be interpreted by the individual and there are lots of possible responses to this question.

“The text is part of the camouflage pattern and is actually quite hard to read. If you look closely at the elephant, you will see the question repeated over and over. One side is in colour and the other is black and white, just like the original dazzle concept.

“I am really pleased with how it’s turned out. It’s created quite a strong effect.”

Talk us through the process for your design

“It turns out it’s not easy painting an elephant. I had intended to use vinyl but I had some issues with that approach so I reverted to using acrylic paint – red, yellow and blue – on one side and black and white on the other.

“I created the graphics on a computer then used a projector to cast the shapes over the blank elephant so that I could paint the correct colours in the right places. It was really quite an intricate and complicated process and took roughly three times longer than I had anticipated.”

“It’s really great but strange at the same time because I haven’t really left my home area much this last year due to Covid.

“I now live in London but I have many fond memories of the Luton area. I remember shopping in the Arndale in the 1980s and going to the town’s camera shops with my dad who was a photography enthusiast. I still find it really thought provoking coming back here.

“I also love seeing the transformation of Bute Street which includes my artwork – that area looks very different now. Seeing ‘Beacon’ on the side of The Hat Factory still gives me huge joy when I visit the town. It still feels a bit of shock seeing it so prominent when you arrive from the station.

“My mural with Jonathan Barnbrook The future demands your participation on Bute Street also seems to be getting lots of positive feedback. Now I have an elephant to add into the mix!

What do you think of the BID, Keech Hospice Care and The Big Trunk Trail?

“I’m very proud to be involved in The Big Trunk Trail for lots of reasons. I think we all need a bit of joy after this last year and art has a wonderful way of bringing people together and making them smile.

“There seems to be even more of an appetite for art and culture now. I love that The Big Trunk Trail is different to other projects I have been involved in too because there is a real family focus. People of all ages and backgrounds will get to enjoy the elephants so it’s really inclusive.

“Seeing all the other elephants is fantastic. They are all so colourful and impressive, including the baby elephants by local schools.

“On top of that, it’s fantastic to be supporting the important work that Keech Hospice Care does for children and adults with life-limiting and terminal illnesses in the local area. It’s a great feeling knowing that I’m playing my part in raising awareness and funds as part of their 30th anniversary celebrations.

“And it’s great to be working with the BID again, to encourage more people back into the town centre in a safe way as businesses reopen. The BID has been a key partner in my other Luton-based projects and it’s great that they support art and culture.”