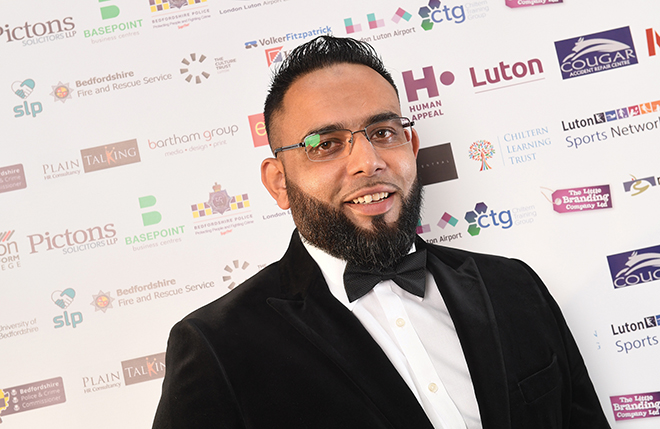 A BUSINESS and community leader has spoken of his pride at being appointed a Deputy Lord Lieutenant of Bedfordshire.

At 38, father-of-four Mostaque Koyes, from Luton, is one of the youngest people to hold the honorary position in the county. He is one of five new Deputy Lord Lieutenants appointed by the county’s HM Lord Lieutenant Helen Nellis.

“I am delighted to have received this great honour, which comes with great responsibility,” Mr Koyes said. “I am committed to continuing my service to the Bedfordshire community as we look to overcome the challenges of the Covid-19 pandemic.

“Many people have inspired me and supported me in my journey. The Deputy Lieutenant role is an opportunity for me to continue to work with and inspire others to give back to their communities.

“As a business and community leader proud of his British Bangladeshi heritage, as well of his Islamic faith, I also want to showcase the contribution people from ethnic minority backgrounds have made to this county.”

Mr Koyes has been a director of the Bartham Group in Luton for more than ten years. The company provides design, media and print services to a businesses and non-profit organisations across the town and the surrounding area.

A good business is indivisible from serving and giving back to the community, he says.

Mr Koyes grew up in the Bury Park area of Luton, close to the Kenilworth Road stadium of his beloved Luton Town FC, where he holds the position of Community Ambassador.

He founded the charity Community Interest Luton and leads on its various initiatives that seek to better the lives of people in the region. CIL has helped provide food to those experiencing financial difficulties and his organisation’s efforts have contributed to reducing unemployment in the town through the LETS Hub project.

He also founded and the annual Luton & Bedfordshire Community Awards, which has recognised hundreds of people for their efforts in the region and raised thousands of pounds for charities.

He is a trustee for Level Trust, a charity that works with families in Luton, as well as a long-time supporter of Luton Foodbank.

Mr Koyes is also a trustee for Squared Housing and Bangladeshi Youth League, part of the Bedfordshire Police IAG and a past president of the Luton North Rotary Club.