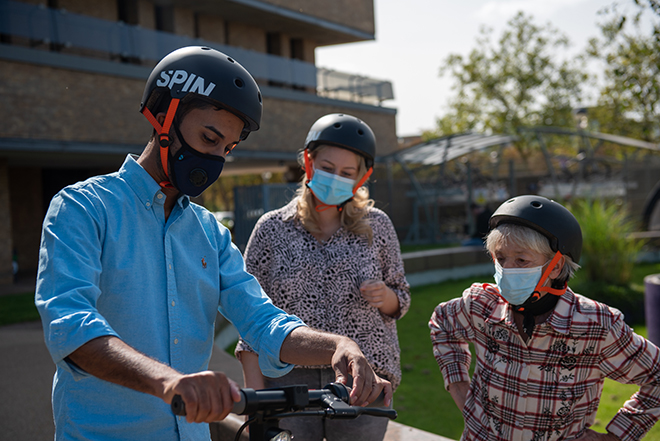 Following the launch of the e-scooter trials across Milton Keynes, personal injury lawyer Navdip Gill, looks at some of the latest news surrounding the use of Personal Light Electric Vehicles and the impact they are having with regards to accidents in the UK.

THERE has been some confusion around the use of e-scooters with many people questioning whether they can be used on footpaths or roads in the area. In fact, there are different rules governing rental scooters compared to privately owned scooters.

Rental e-scooters are allowed on minor estate roads and cycle lanes but will continue to be banned from pavements. They are not permitted on grid roads or any roads with a speed limit of more than 30mph.

The rental e-scooters have a maximum speed limit of up to 14.8mph and are subject to MOT, tax and licensing. Riders must be aged 18 years or over and hold at least a provisional driving licence, motorcycle or moped licence and it is recommended they should wear helmets.

We also discovered in one of the providers’ T&Cs that there is a weight limit of 220lbs (15.71 stones) and it is not permitted to carry any passengers. If you do so, the insurance provided by the hire company will be void, leaving you personally liable in the event of an accident. Milton Keynes Council has confirmed in a recent press release that rental e-scooters are permitted on the redways.

Legislation regarding privately owned e-scooters is far more complicated. These scooters cannot be used on pavements, cycle lanes, redways or public roads and anyone who does so is committing an offence and risks the penalties of a £300 fine and six points on their driver’s licence. Even if you do not have a driving licence, points can be added once you have passed your test.

So, technically, you can only ride privately owned scooters on private land. Otherwise if you cause an accident on public land you will be personally liable. To put it into context, the average cost of a head injury claim can be in the region of £200,000 plus legal costs, which can amount to a further £100,000.

Unfortunately, some users of these e-scooters do not think about the hazards they are creating when they park irresponsibly, making it difficult for pedestrians and other people with disabilities to pass. These quiet vehicles also pose an issue as it is difficult to hear them approaching.

In the USA a neurosurgical team conducted a study over a 15-month period from September 2017 to November 2018 to look into the metropolitan areas where a dockless vehicle pilot programme had been permitted. It clearly showed there had been a rapid growth in skull fractures and spinal cord injuries.

Traumatic brain injury costs the UK economy about £15 billion a year and is the leading cause of death and disability in the under-40s. It is now classed as a global epidemic.  Unfortunately, in July last year, the UK saw its first electric scooter fatality when the TV presenter Emily Hartridge was thrown into the path of a lorry in South London.

Even more worrying, however, is the recent news article by leading neurosurgeon Christopher Uff, who says that e-scooters are responsible for a growing number of serious injuries to both riders and pedestrians brought into the Royal London Hospital where he works.

Furthermore a number of pedestrians who have been knocked over by e-scooters on pavements have suffered injuries ranging from broken bones to skull fractures.

It is important that local authorities, together with the police, need to enforce these regulations with tougher penalties for those flouting the regulations to ensure the safety of pedestrians. e-scooters are great for the environment but they also represent a danger to vulnerable pedestrians and there must be greater education for both to co-exist, especially on overcrowded  pavements.

Navdip Gill is a personal injury lawyer at Geoffrey Leaver Solicitors. Contact him at ngill@geoffreyleaver.com or 01908 689338.