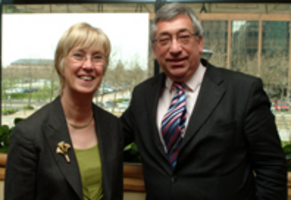 Speaking at a lunch hosted by the Institute of Directors’ Milton Keynes branch, Dr Starkey said that expansion was a huge opportunity but there was too much concentration on narrow local issues and less on seeing the bigger picture.

Dr Starkey is pictured with IoD branch chairman Philip Smith. In response to a question from him about what more the business community could do, she said: "The public debate is sometimes dominated by a rather narrow view and that’s where business needs to be more active and more vocal in taking part."

Dr Starkey, MP for Milton Keynes South West, told her audience at Jury’s Inn, Central Milton Keynes, that the debate about why so many new homes were needed was "going by default."

She said: "The arguments for the positive aspects of growth aren’t really being made strongly enough. These are arguments that business can make quite strongly."

The business community was creating jobs, she said, but it needed to keep creating them and maintaining work. However, the link between economic growth and economic development, prosperity and people’s standard of living was not being made.

"Milton Keynes has always been in the right place which is why it’s been so successful and it’s always been about innovation which we should hang on to. We need to get out and convince people that growth is an opportunity."