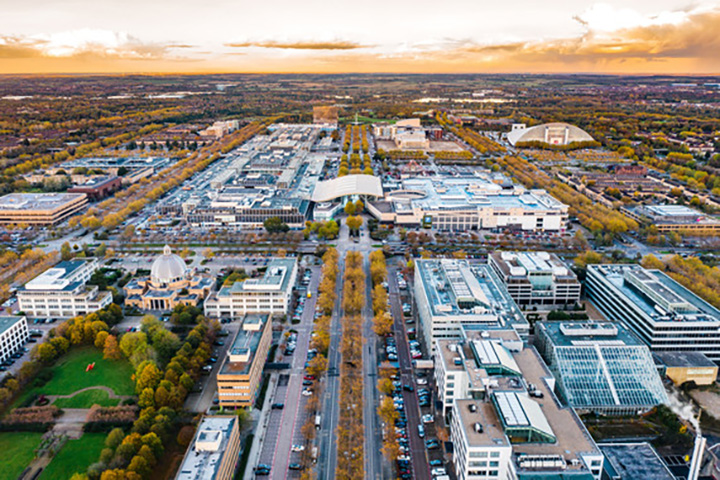 MILTON Keynes is ahead of the national average when it comes to economic growth and the wellbeing of its residents, says new research.

It is the fifth-highest performing town in the UK, with an estimated ecomomic growth rate of 7.4% against the national average of 7.3%. And, says the latest  Demos-PwC Good Growth for Cities Index, it scores above average against seven economic wellbeing indicators.

It found that Milton Keynes was the top-ranked Midlands town contained in the index and scored above average for income, health, new businesses, homeownership rate, skills among those aged 25+, environment, and safety.

The only indicator which ranked below average relative to the index for all other cities was work-life balance.

Sam Taylor, market senior partner for PwC in Milton Keynes, said: “We are emerging from the pandemic with a new set of priorities, largely focused around fairness, the environment and work-life balance. Our research shows Milton Keynes is poised to make a strong economic recovery and it is encouraging to see the town score so well on many of the indicators that people value, from health and income to environment and safety.”

The Demos-PwC Good Growth for Cities Index ranks 50 of the UK’s largest cities and towns, plus the London boroughs as a whole, based on people’s assessment of 12 key economic factors.

Each indicator is weighted relative to how important it is considered by the 1,000 people surveyed as part of the study. In comparison to last year’s report, the importance given to these indicators by the members of the public who have been polled has shifted considerably.

Jobs and skills, two of the most important variables last year, see significant decreases in their importance in the updated Index.

In contrast, the environment and income distribution have seen significant increases. For the first time, two new indicators – safety and high street and shops – have been added to the index.

Milton Keynes is among six of the 11 cities and towns measured which scored above average for economic growth. The others are Derby, Leicester, Nottingham, Stoke-on-Trent and Wolverhampton/Walsall. On transport, four towns scored above average, including Northampton.

However, Northampton was one of five to score below average in the measurement of jobs.

The report underlines how the North-South divide continues to present a challenge, with Oxford, Bournemouth, Swindon, Reading and Milton Keynes making up the top five in the overall index, while cities in the North and Midlands largely account for those that sit at the bottom.

Of the 12 variables included in this year’s index, the biggest driver for improvement for cities over the last three years has been better work-life balance. Broad improvements in the skills of older workers, as well as income distribution and life expectancy, have also seen the gap narrow slightly between the highest and lowest ranked cities.

However, several of the scores for several variables – those most likely to have been negatively impacted by the pandemic – have fallen over the past two years, including the number of new businesses opening, the strength of the high street and owner occupation rates.

Mr Taylor said: “The data finds that our high streets need investment and focus – while Milton Keynes scores around average on this indicator, there is not a score above average across the Midlands and our data shows having vibrant local high streets is a core public measure of economic success.

“It is clear there are still challenges ahead for local government leaders and business owners as they look to navigate the change in community priorities that has occurred over the last couple of years.

“Work-life balance is the only indicator where the town scores below average – while there will not be a one-size-fits-all solution to this, local employers can assess their flexibility offerings in order to attract and retain employees.”

The opportunity for flexible working is important both for work-life balance and for employers looking to attract and keep staff, says Sam Taylor.

Karen Finlayson, PwC’s regional lead for government and health industries, added: “Once again, southern cities dominate this year’s Good Growth index. It is clear that regional inequality remains a very clear reality that cannot be ignored. The government’s Levelling Up White Paper was a welcome acknowledgment of what is a long-term and incredibly complex problem.

“Every individual city will face its own unique set of challenges and priorities that will need to be addressed through innovative, imaginative and tailored solutions. The provincial cities that are currently performing strongly will now have a different set of needs than larger metropolitan cities, some of which have experienced a period of poor growth.

“The growth we are seeing in these areas, combined with changing priorities among the public, presents us with a golden chance for a big reset.

“This is a generational opportunity to accelerate the levelling up agenda. We must capitalise on the growth we are seeing outside of our larger cities, which is driven in part by an increased focus on wellbeing and fairness but there is only a small window to act, otherwise we risk drifting back to the status quo.”

Mr Taylor said: “There is a clear need for central and local governments and businesses to develop localised plans to address not only the regional inequalities but the societal gaps that also exist within their cities, towns and communities.”